Third season of hit kids series is set to air in France, Germany and elsewhere in Europe in 2016. 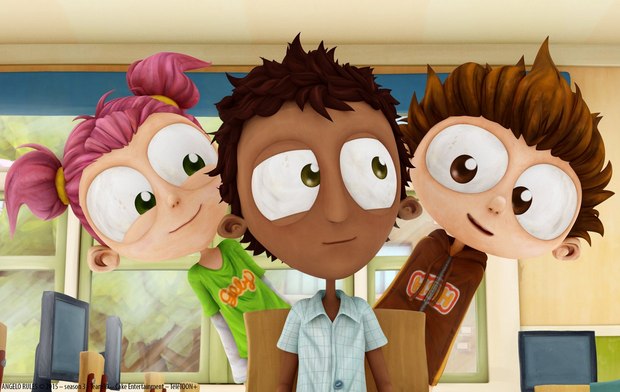 A TeamTO/CAKE co-production for France Television and Teletoon+, with CAKE pre-sales to Super RTL and Cartoon Network EMEA has already confirmed. The new season is being delivered at end of 2015 and is set to air in 2016. It will be aired in France, Germany and around Europe. CAKE handles international distribution.

ANGELO RULES became an instant broadcast hit from its debut in 2010 and has aired in over 100 territories. It has been widely recognized within the animation industry since receiving a Pulcinella Award for Best Kids TV Series at the 2010 Cartoons on the Bay Festival. It was also nominated for awards at the 2013 Emmy® Kids Awards; 2013 Trickfilm Festival; 2012 Anima Mundi; and 2011 BANFF World Media Festival.

ANGELO RULES follows 11-year-old Angelo who is a sweet-talking genius.  Along with his two best friends Sherwood, the king of logistics and Lola, whose enthusiasm often eclipses Angelo’s, Angelo has a knack for getting out of trouble by using a combination of clever planning irreverent attitude, a rebellious nature, optimism, and, most of all, charisma to make things go his way!

Although the cast of the series remains unchanged, the arrival of director Max Maleo brings a fresh perspective to the directorial style in this latest season, while still clearly fitting within the existing and very distinctive look originally created by Chloe Miller.

Based on the French series of books Comment Faire Enrager, written by Sylvie de Mathuisieulx and illustrated by Sébastien Diologent, Season 3 brings the total number of episodes to 176.

Creative Director and CEO, Tom van Waveren from CAKE commented, “The luxury of producing a third season of a series is that all the key talent know the show so well that there is room for further delving into the richness of the characters and their world. We are very proud of the third series of ANGELO RULES and invite everyone to screen our brand new episodes at MIPJunior.”

“The direction and animation of this new season is stunning, punchy and sparkling - the characters move and act like real, cool kids,” adds TeamTO Executive Producer and Founder, Corinne Kouper, “Full of good energy and an updated style, Angelo, Sherwood and Lola still manage to surprise us with lots of new tricks and much more fun.”