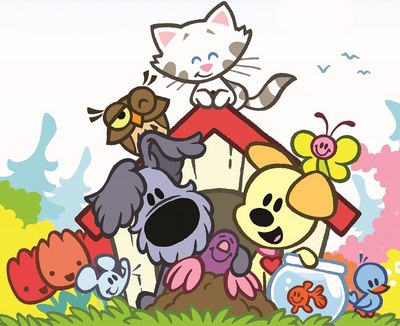 Leading kids’ and family entertainment content distributor CAKE, has been appointed as the international distributor for preschool property Woozle & Pip. The series was created by Amsterdam based The Dreamchaser Company and co-produced with KRO NCRV Youth.

The 2D hand-illustrated animation is based on a number of top selling children’s books of the same name, with more than 1.5 million books sold to date in the Netherlands alone. The 52 x 5’ series follows the exciting adventures of the two most loveable dogs in the world, Woozle and Pip, who live in the Magic Garden together with their friends. Their world is filled with friendship, curiosity, discovery and positivity, which connects with the hearts and lives of children and parents everywhere.

The series has enjoyed huge popularity in its home territory, scoring top ratings since the very first broadcast and rated the number 1 preschool brand in the Netherlands. The series also received a nomination for the prestigious Prix Jeunesse International Prize. In 2014 Woozle & Pip debuted in Germany with a stellar start on KiKA’s Sendung mit dem Elefanten, breaking the viewing record at its prime time slot in Elefantastisch.

Since the first book release in 2005, Woozle & Pip have experienced unprecedented commercial success, establishing the best selling Dutch preschool brand and a top selling line of products including books, music, toys, apps and a theatre show!

Ed Galton, CCO & Managing Director, CAKE, “It’s exciting to add a property to our offerings that has a proven connection with the pre-school audience. We have no doubt that its success story will keep building as we take it into the world with our new friends at The Dreamchaser Company.”

Lucy Woesthoff, CEO, The DreamChaser Company “We are thrilled to announce this new partnership with CAKE and can’t wait to introduce the world of Woozle & Pip to the hearts and imaginations of children all around the world, together with their dedicated team.”