Forty brand-new episodes of the award-winning preschool series to feature some of NASA’s most famous scientific explorations. 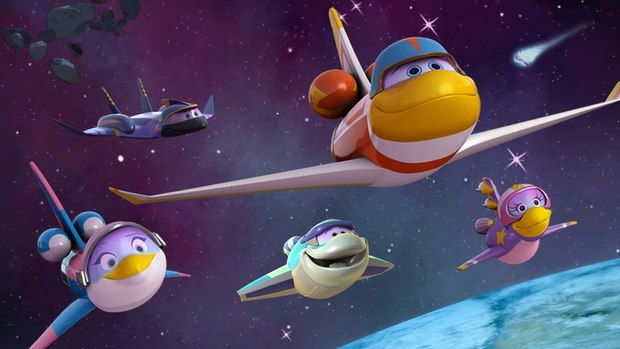 LONDON -- Kids entertainment specialist CAKE has announced the launch of a second season of the award-winning pre-school series Space Racers.

40 brand new 11 minute episodes will see our favorite space cadets Eagle, Robyn, Hawk, Starling and Raven journeying through the solar system using teamwork and scientific discovery to explore the wonders of the universe and real rocket science. The new season features some of NASA’s most famous scientific explorations, including Mercury’s MESSENGER probe, the Voyager One spacecraft, and Mars rovers Curiosity, Opportunity, and Spirit.

The stunning CGI animation brings to life the richness of space and the diversity of planetary landscapes in a fast-paced humorous and entertaining environment. With new characters, including brash transfer student Kite and young Merlin, a rocket born with one short wing, this season explores emotional issues including bullying and growing up with physical challenges, as well as continuing to show young viewers the power of scientific investigation and the wonders of space exploration in a fun and engaging way. Space Racers is collaborating in a partnership with the U.S. Space & Rocket Center’s Space Camp, to which NASA serves as technical and educational consultant pursuant to a cooperative agreement.

Space Racers has been translated into 25 languages and has aired in over 130 countries around the world. Broadcasters include Netflix, France 5, RTE, YLE Finland, NRK Norway, Hop Israel, TVNZ New Zealand, MBC and Al Jazeera in Middle East, KBS South Korea, Cineplex and PBS Thailand and in China the series is represented by JY Entertainment. Space Racers has been awarded The American Public Television Programming Excellence Award, The Parents Choice Award and The Cynopsis Imagination Award. Produced by Space Race LLC, Season 2 is currently premiering in the US on NBCUniversal Cable Entertainment’s pre-school network Sprout where, since launching in November last year, it is the number 2 show among 2-11 year olds.

Ed Galton, CCO and Managing Director at CAKE said, “Space Racers has been extremely popular with young audiences and with 40 brand new adventures from our favorite rocket cadets our young viewers will not be disappointed.”