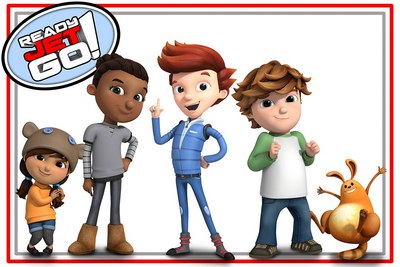 Ready Jet Go! follows two neighborhood kids: Sean, who has an all-consuming drive for science facts, and Sydney, who has a passion for science fiction and imagination. They both befriend the new kid on their street, Jet Propulsion, whose family members happen to be aliens. Together, they embark on great adventures, exploring the solar system and learning about space and science, but Jet always makes sure he has them back just in time for dinner.

The series was created by Craig Bartlett, creator of PBS KIDS’ Dinosaur Train and Nickelodeon’s Hey Arnold! and produced and financed by Wind Dancer Films, producer of motion pictures What Women Want, Bernie and TV series Home Improvement and Roseanne, with assistance and curriculum support from scientists at the Jet Propulsion Laboratory (JPL).

The animated series will premiere in the U.S. on PBS KIDS on 15 February 2016. Ready Jet Go! is designed to inspire an interest in astronomy, earth science and technology for kids ages 3-8. Wind Dancer Films is currently in production for 40 half-hour episodes of the series.

As a child’s first introduction to space and earth science, Ready Jet Go! uses inventive visuals and upbeat songs to engage, entertain and make young viewers laugh and learn. Their experience will be further enhanced through a dynamic website, a creative digital app and interstitial video elements for use in both broadcast and digital formats.

CAKE has been appointed to handle worldwide distribution outside the US; and Canada (but including broadcast rights for the latter), and will introduce the series at MIPCOM.

“Under the passionate direction of Craig Bartlett and Dete Meserve, this project has evolved into a great entertaining character lead series with strong curriculum elements but above all, great stories with humor that will appeal to our young viewers,” said CAKE Managing Director and COO Ed Galton. “We are looking forward to bringing what promises to be a highly entertaining show to international audiences.”

“We are very excited to be working with Ed and Tom and the entire dedicated Cake Team to bring Ready Jet Go! to young audiences around the world,” said Wind Dancer Films’ President.