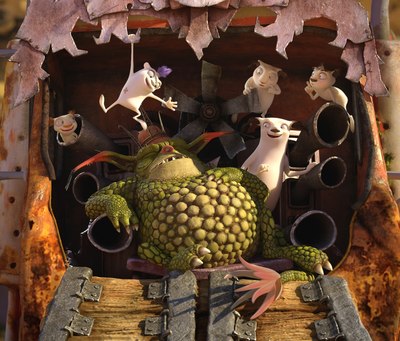 LONDON – Kids’ entertainment specialist CAKE and Australian production outfits Cheeky Little Media and Mighty Nice have signed a UK publishing deal with Hodder Children’s Books, for their new CGI children’s comedy series Bottersnikes & Gumbles. Hodder Children’s Books, a division of the Hachette Children’s Group, will publish a series of young fiction and sticker and activity books aimed at 6-9 year olds based on the TV series, which is set to air on CBBC in July this year.

Bottersnikes & Gumbles (52 x 11’) is coproduced by CBBC in the UK and Seven Network in Australia and is also a NETFLIX global original title. The series won this year’s coveted Pulcinella Award for Best Kids TV Series at the prestigious international animation festival Cartoons on the Bay in Venice. The series has also been nominated for a Logie Award in Australia for Most Outstanding Children’s Program.

Bottersnikes & Gumbles was adapted from the four-book series of children's books by Australian writer S. A. Wakefield and illustrator Desmond Digby, published between 1967 and 1989. It follows the timeless battle between good and evil as well as between squashy and scaly, happy and grumpy, clever and wily, handsome and plain old ugly. This is the land of the mean, lazy Bottersnikes and the fun seeking, stretchy Gumbles.

Ed Galton, CCO & Managing Director at CAKE commented, “We were hugely impressed with the presentation that Katie and her team at Hodder Children’s Books pitched to us and this solidified our belief that they are the best publishing partners for this unique property.”

“The passion we poured into creating the TV series was fueled by our love for the original books as kids,” added Patrick Egerton, Executive Producer at Cheeky Little. “To be embarking on a new series of books with the talented team at Hodder Children’s Books, and taking what we’ve re-imagined for the TV series back into print, is really exciting. The Bottersnikes & Gumbles are coming home!”

Katie Price, Licensing Director, Hachette Children’s Group, commented, “We are delighted to be publishing the books to accompany this new CGI children’s TV series. The Bottersnikes & Gumbles world is active, playful, involving and big-hearted with a wealth of funny characters and timeless storytelling at its heart.”