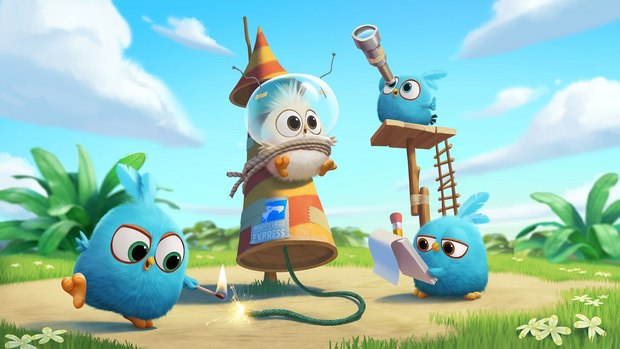 Angry Birds Blues follows the antics of mischievous bluebird triplets Jake, Jay and Jim who, when not under the watchful eyes of their doting parents, charge into uproarious and outrageous escapades on Bird Island. Bursting with energy and big plans that wildly succeed or hilariously fail, the Blues’ feats are often complicated by a supporting cast of naive, yet adorable, baby hatchlings, who make the perfect pawns for the Blues’ pranks in crazy antics and unbelievably comic disasters that you won’t be able to resist!

Angry Birds Blues was teased during the end credits of The Angry Birds Movie, which reached number-one at the box office in over 50 countries while the cuddly wide-eyed Hatchlings became breakout stars in their own right, making their first appearance in the 2015 viral holiday short, which has seen over 40 million views to date.

“Angry Birds Blues is a great addition to the Angry Birds franchise which now consists of 10 series,” said CAKE CCO and Managing Director Ed Galton. “The cute loveable characters are already a hit with fans all over the world and we are looking forward to launching the series at MIPTV.”

“We are very excited to have the adorably mischievous Blues teaming up with the Hatchlings in various shenanigans!” said Alex Lambeek, Chief Commercial Officer at Rovio. “They will delight and entertain our fans while introducing these newest additions to the Angry Birds flock to our vast audiences. It is great to continue our successful cooperation with CAKE and we look very much forward to the series’ launch at MIPTV in April.”