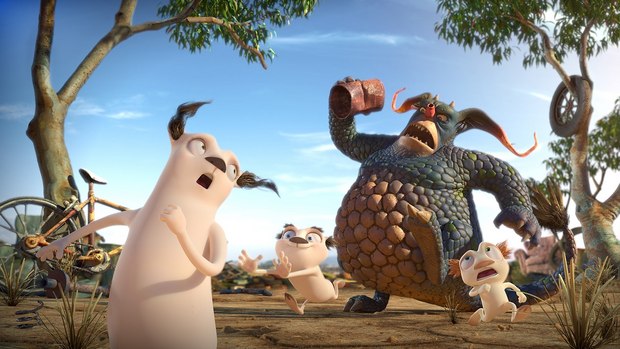 Lisle International in the UK & Eire (The Zelfs, Masha & The Bear, Temple Run, Tetris) and The Fusion Agency in Australia (Trolls, Dinotrux, Noddy, Kung Fu Panda, Where's Wally, In the Night Garden, Driftwood Bay, Dr Seuss) will be responsible for seeking out partner licensees in all core categories. They will introduce the property to companies at the London & Nuremburg Toy Fairs at the end of this month

Bottersnikes and Gumbles is a CGI comedy series aimed at 6 to 9 year olds. It follows the adventures of three Gumble heroes, Tink, Bounce and Willi, who can squash and stretch into any imaginable shape without being hurt. They love nothing better than to “gumble” all day long, which means crazy, stretchy capers around their junk valley while carefully avoiding getting tin-canned by their stinky, grumpy, lazy neighbors, the Bottersnikes.

Produced by CAKE, Cheeky Little Media and Mighty Nice Productions, Bottersnikes and Gumbles is a NETFLIX original title co-produced with CBBC in the UK and Seven Network in Australia who have already begun airing the series, while CBBC are set to broadcast in July 2016. NETFLIX will premiere the series globally across all markets in 2016 except for Australia and the UK, which will join NETFLIX in 2016 and 2017 respectively

Based on the successful and much loved books by S.A. Wakefield, with illustrations by Desmond Digby, Bottersnikes and Gumbles was published in the UK and Australia between 1967 and 1989 and became widely known for its humor, absurdity, playful language and sense of the ridiculous, a combination which immediately captured the hearts and minds of children everywhere

Ed Galton, CCO and Managing Director, CAKE commented, “The response to Bottersnikes and Gumbles has already been overwhelming. Everyone who discovers it is charmed and amazed.”

“This property is really dear to our hearts and has been since we read the books as kids. We now look forward to seeing it take flight as a brand,” said David Webster, Creative Director, Cheeky Little Media.

Francesca Lisle-Grimshaw, Lisle International added, “We are very much looking forward to working with both Cheeky Little Media and CAKE on Bottersnikes and Gumbles. The animation is extremely entertaining and we think it will translate fantastically well into merchandise.”