The Johannesburg-based, mother-daughter animation and illustration studio will showcase the new animated shorts produced by up-and-coming artists in a virtual ‘Mini-Festival’ starting October 15. 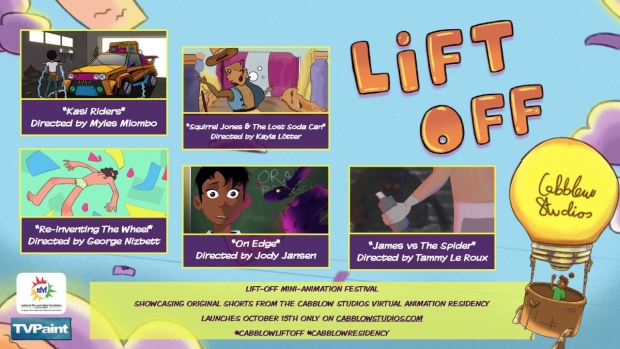 The paid residency program produced five new animated shorts for the studio from five talented, up and coming artists, which will be showcased through a “Mini-Festival” on the studio’s website, beginning October 15. The pieces will also be entered into worldwide festivals.

“Both the residents and our core team of animators grew from the experience and the icing on the cake was realizing that the residency was actually an answered prayer for some of our artists who had been searching for work for more than 2 years,” shared Kabelo Maaka. “The fact that the shorts are all so different proves that we have a lot of stories to tell as South Africans.”

Over the next month, the studio will upload behind the scenes interviews with the residents on their YouTube Channel, as well as pursue a number of initiatives to spotlight their work. The residency will be continued and expanded internationally; a new set of projects are already underway with the participants.

Funded in part by South Africa’s Presidential Economic Stimulus Package (PESP Fund) through the National Film & Video Foundation (The NFVF) the program received additional support from the studio’s software partner, TVPaint, who provided five licenses to the animators for the duration their residency.

“The residency tested our skills to manage a larger team and allowed us to see the growth in the skill sets of our studio,” added studio co-founder Dr. Tshepo P. Maaka. “This is a great way of growing the animation industry in our country and on the continent.”

Here is a summary of the resident’s work: Squirrel Jones & The Lost Soda Can – directed by Kayla Lötter James vs The Spider - directed by Tammy Le Roux