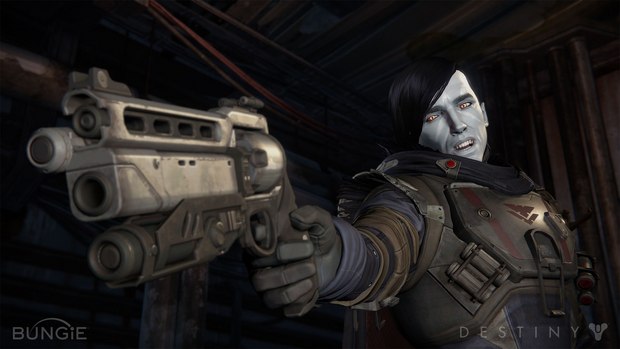 Destiny is the next evolution of first person action genre, developed by Bungie and published by Activision Publishing, Inc. Players can personalize and upgrade nearly every aspect of their custom characters a nearly limitless combination of armor, weapons, and visual flair. Destiny is set to release September 9th, 2014.

Faceware’s markerless motion capture system was previously used on Bungie’s Halo: Reach. The product line uses video to capture every detail of an actor’s face, and computer vision software to transfer that performance quickly to digital characters, giving Bungie’s artists a detailed first pass to which they can then add greater detail to their characters. The ease with which Faceware translates real performances into digital performances is one of the main reasons Bungie decided to use the technology on Destiny.

“When we develop a game at Bungie, our goal is to fuse brilliant technology, beautiful art, compelling stories, and deep gameplay into games that audiences worldwide want to play,” said Dave Lieber, Cinematics Supervisor at Bungie, Inc. “Faceware has been used on Academy Award-winning movies and some of the highest grossing AAA videos games of all time. There’s a reason for that: their products are production proven, easy to use, and indispensable to any team wanting to elevate the realism of their character performances without being locked into a particular capture pipeline, rig or art style.”

“Bungie’s artists have the flexibility to build upon a real-world performance, and easily add their own artistic touch, as desired,” added Pat Jandro, Bungie’s Lead Facial Animator.

“Bungie has produced some truly amazing titles over the years. They are one of the best in the business,” said Pete Busch, VP of Product Development at Faceware Technologies. “All of us at Faceware are honored that Bungie has chosen our products yet again. We can’t wait to see what they create for Destiny.”