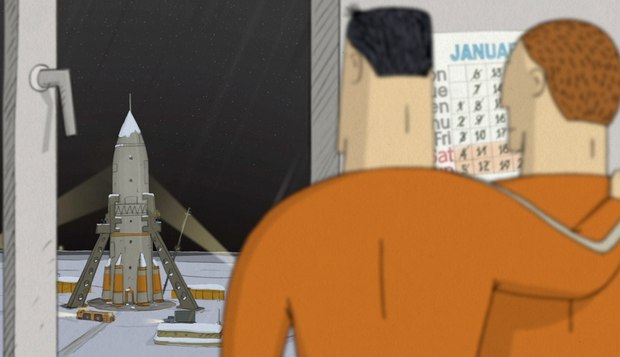 ŽILINA, Slovakia -- The international animation festival Fest Anča wrapped up on Sunday, June 28 at the New Synagogue in Žilina. The main Anča Award -- with prize money of EUR 800 -- was given to Russian director Konstantin Bronzit for his film We Can’t Live Without Cosmos.

The short film, which was awarded the Cristal at the year’s Annecy festival, is an engaging story of two astronauts who try their best in everyday training to make their dream come true. According to the international jury composed of Tomm Moore (IRL), Tünde Vollenbroek (NL) and Alexandra Hetmerová (CZ), “the film is a pure character animation. Human emotions, friendship and an Olympic-like strong will are brilliantly expressed through subtle actions. The character`s personalities don`t need dialogue, they show through the animation. The film´s visual humour and narrative are constantly surprising. All these elements make the winning film a stunning piece, which tells a universal story about the important things in life.”

The Anča Student Award statuette and EUR 400 was awarded to U.K. director Daisy Jacobs for her stop motion short film, The Bigger Picture. The Oscar-nominated short depicts the struggles of two brothers caring for their elderly mother -- a story rarely told in animation. The film’s strong dialogue is complemented by symbolic actions displaying the brothers’ moods, using a technique previously unseen.

The international music videos competition was won by Chris Ullns (U.K.) for the video clip Hey Now that he created for the British band London Grammar. In addition to the Anča Music Video Award statuette, he was also awarded EUR 400. According to the jurors Mari-Liis Rebane (EE), Guillaume Pouchoux (FR) and Ygor Marotta (BR), “The music video that won the Anča Music Video Award stands out because it created a magical environment using the play of light and nature. The film has a delicate balance between sound and visuals.”

The Anča Slovak Award was awarded by the jury composed of Mária Ferenčuhová (SK), Eliška Děcká (CZ) and Jan Naszewski (PL) to Jasmine Elsen`s film Half Bábka that addresses the subject of loneliness in an intelligent, witty, yet touching way.

“To get a film to distribution is the best award of all, because it enables a local film to reach thousands of viewers,” said festival director Jana Slezáková. “We are very happy that we can offer this opportunity to animated films, as the only festival to do so in Slovakia,”