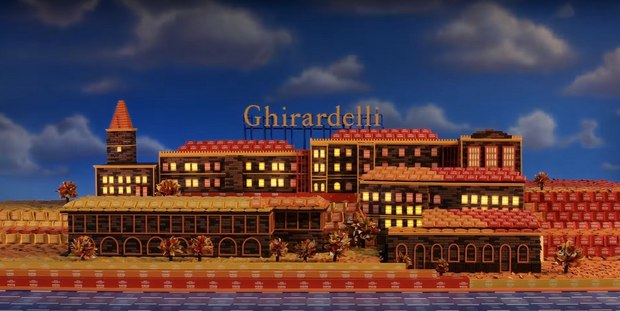 "Chocolate Carving” plunges viewers into an all-chocolate world with detailed animated drawings that come to life in chocolate, carving out iconic San Francisco hallmarks such as the Golden Gate Bridge, a cable car, and Ghirardelli Square. Brickyard’s Motion Designer Anton Thallner created the illustrations of each element in Adobe After Effects, which CG Supervisor/Creative Director David Blumenfeld then animated in Autodesk Maya to appear as if they were embossed within a 3D chocolate canvas.

For "Time-Lapse,” Brickyard worked with Director Chachi Ramirez of Mercy Brothers and Bix Pix Studios to create a time-lapse video capturing the creation of a miniature model of Ghirardelli Square, built over the course of 12 hours using over 8,000 Ghirardelli minis. Brickyard guided the spot from production through finish, including VFX to help transition the spot to nighttime with interior window lights and stars in the sky.

“These Ghirardelli spots were a really fun way to use a range of skill sets from motion design to CG,” commented Brickyard’s Managing Partner Steve Michaels. “Building the time-lapse model required true teamwork from all parties and thanks to everyone’s advance planning and enthusiasm for the concept, the final result is stellar.”