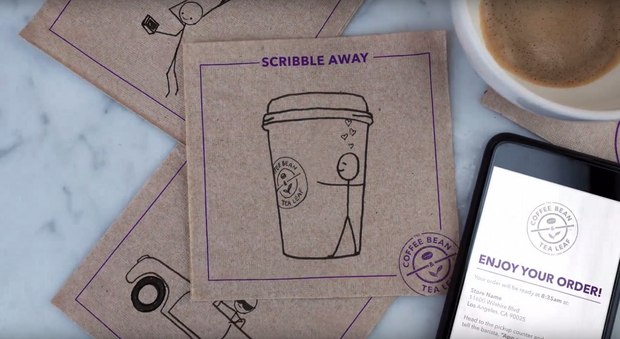 SANTA MONICA, CA -- Bicoastal digital production studio Brickyard VFX recently collaborated with The Pitch Agency on a spot to illustrate the convenient features of The Coffee Bean & Tea Leaf’s mobile app, including ordering ahead, paying by phone, and earning personalized rewards. Under the direction of Anton Thallner, the team at Brickyard provided end-to-end creative services for the project, including live action production, post, editorial and animation.

The 30-second spot conveys the convenience of ordering with CB&TL’s new mobile app, blending live action elements with a lively, animated stick figure character that comes to life after he’s doodled on a napkin by a customer.

“Early on we decided that that the character would be extremely simple, as if a Coffee Bean customer had actually sketched him while placing an order with the app,” said Thallner, who both designed the character and animated his movements. “The challenging part was bringing him to life with personality and emotion, and making him move in a lifelike way while still remaining a simple doodle.”

The stick figure character and all doodles that appear in the spot – including a convertible car, parachute, skateboard and more – were hand-drawn in marker, scanned, processed and imported into Adobe After Effects for animation.

To capture the live action background plates, the team at Brickyard used stop-motion photography techniques during an eight-hour shoot at a Los Angeles CB&TL store. Co-DPs Patrick Poulatian and David Blumenfeld shot handheld on a Canon 5D Mark II, capturing sequences of high-resolution still frames. When played back at eight frames per second, the shaky handheld footage achieved a handcrafted stop-motion look. The stick figure character and all animated elements were composited into the live action background plates in post.

“Thanks to the collaboration and trust with the awesome team at The Pitch Agency, we were able to tackle all aspects of production, animation and finish,” concluded Thallner. “Brickyard artists are passionate about helping clients tell stories through live action, animation and visual effects, and our team really came through for Coffee Bean.”