New animated series produced by Atomic Cartoons and Sticky Pictures commissioned by Teletoon in Canada and Nine Network in Australia. 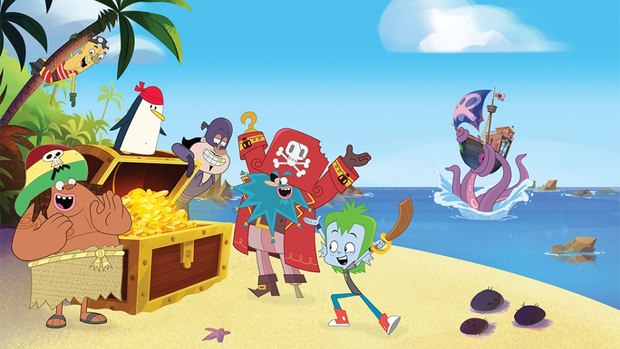 Toronto, CA -- Expanding on its critically-acclaimed children’s library, Breakthrough Entertainment will be launching Pirate Express, an all new animated series produced by Atomic Cartoons and Sticky Pictures and commissioned by Teletoon in Canada and Nine Network in Australia.

Pirate Express (52 x 11’,) featuring high seas action, adventure and comedy in a fantastical world follows the escapades of Newt, a 12-year-old boy from Atlantis, and the most dim witted crew on the seven seas, onboard the ship Pirate Express! Newt’s father, the almighty Poseidon, has made Newt the captain of the Pirate Express. Newt’s mission? To watch over a motley menagerie of misfit mariner miscreants and keep the former captain, LaPoutine, and his salty shipmates, away from mischief and out of trouble. Newt attempts to tame the untamable, leading his crazy crew of unruly pirates on bizarre voyages. No pressure. Join Newt, LaPoutine, Armando, Burt, Booli, and Spewey the penguin, as they travel the 7 Seas and beyond, spreading cartoon comedy…and CHAOS of god-like proportions!

“Pirate Express is not the obvious pirate series, as one might expect. This crew is extra motley, doing things out of typical character, putting character-driven comedy into this sitcom. The cartoon is chock-a-block with strange creatures, gods and demigods, and assorted pirate weirdos. Expect the unexpected!” said Nat Abraham, President of Distribution for Breakthrough Entertainment. “With outrageous adventures, an out-of-control world to explore and a gallery of some of the wildest characters on TV, Pirate Express taps into the global funny bone. We are delighted to share this swashbuckling series with the international community at Mipcom 2014.”