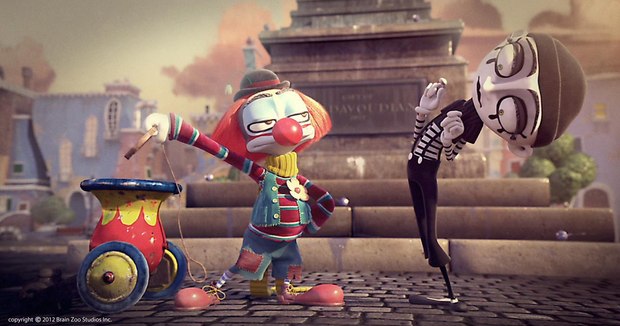 LOS ANGELES -- Emmy Award winning animation house, Brain Zoo Studios celebrates its 20th Anniversary. In 1994, Mo Davoudian premiered his first animated short films, NORA and FIRESTORM, while still in college. Both were presented at Art Center College of Design as part of a final presentation that Davoudian created with his fellow classmate, Farzad Varahramyan. These two complex films were an experiment that had never been attempted before at the college. These innovative films launched their careers and started them on a path to help shape and influence the new industry of 3D animation.

That year, Davoudian launched Brain Zoo Studios, a company that became an industry pioneer in solidifying CG animation as premiere form of entertainment. Over the years, the studio became synonymous in animation, games and film. A reputation for doing the impossible with a singular vision, Brain Zoo is known for innovation, creativity, engaging characters and quality animation.

“I was 25 and still in college with a year to go before graduation. The company started with 3 computers in a single room and lots of late nights and weekends with a couple of guys I went to school with, Hyon Kim and Daniel Hererra,” said Davoudian.

Over the last 20 years, the company has established itself as a leader in episodic series, game cinematics, trailers, commercials and animated films. Brain Zoo is also recognized worldwide as an innovator in using real-time game engines for cinematics, cartoons and animated films since 1998. Accomplishing the impossible, Brain Zoo produced 2 cg animated feature films for Marvel in 6 months each, all at their studio in Los Angeles, Iron Man & Captain America: Heroes United and Iron Man & The Hulk: Heroes United. This past year, they produced the Sick Bricks webseries for Spin Master, cinematics for Disney’s Infinity, Telltale’s Game of Thrones and Borderlands, Activision’s Skylanders and an Unreal Engine film for InXile’s Bard’s Tale.

Brain Zoo Studios is currently headquartered in Los Angeles, complete with Motion Capture stage and Facial Capture facilities. The company is also home to 3 Headed Robot, the Motion Design and Creative Agency Division. Along with their thriving service business, Brain Zoo continues to develop and produce top-rated, critically-acclaimed entertainment for audiences around the globe. The company is currently in post-production on NORA, a boy’s sci-fi film, in development on the series, Console Marinez and in production on their award winning feature film, Pepe & Lucas.

In the coming weeks, fans can expect to see the new trailer for NORA, a reboot of the short film that launched the Company at E3 back in 1995.