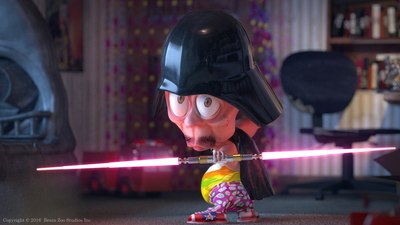 The show is about a group of diabolical evil doers attempting to bring armies of video game villains into our world. Their mission is to convert earth into a virtual game and turn their game world into reality. All that stands in their way is a group of uber gamers called the Console Marinez. The series takes the audience on a high resolution VR comedy, a journey that puts the viewers right in the middle of the battle for the earth’s soul.

“Console Marinez makes complete sense to create in VR” commented Mo Davoudian. “It was conceived as a show that needed to immerse the audience in the world so they would feel a part of it. This puts the viewer right in the middle of the battle, drama and humor.”

For over 15 years, Mo Davoudian and the Brain Zoo Studios team has been telling virtual stories in real-time using game engines. Serving as the ‘go to’ company for such games as Disney Infinity 3, Warhammer 40,000, Game of Thrones, Borderlands, Skylanders, Tera Rising, Command and Conquer: Tiberium Wars, Gears of War, the upcoming Bard’s Tale 4 and animated films such as the Marvel Heroes United series