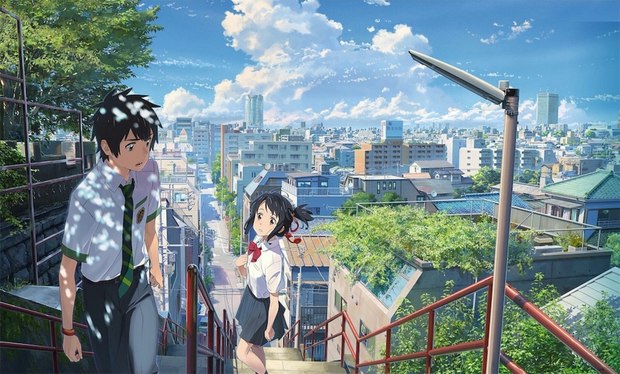 Makoto Shinkai’s 2D-animated feature Your Name (Kimi no Na wa) became the second-largest-grossing Japanese film of all time, overtaking Hayao Miyazaki’s Howl’s Moving Castle with a total of $197.5 million since its release in August.

The film also debuted to a whopping $41 million in China, placing it firmly at the top of the box office in world’s second-largest film market.

Just one week earlier Your Name surpassed the domestic haul for Miyazaki’s Princess Mononoke, and the blockbuster anime feature is still bringing in audiences in Japan, where it has occupied the top of the box office chart for 12 weeks out of its 15-week run. The film was in second place again this weekend, behind Fantastic Beasts and Where to Find Them.

Your Name -- which began its Oscar-qualifying run in Los Angeles on Friday -- has been shortlisted for an Oscar nomination, and also recently received an Annie Award nomination for best Independent Animated Feature.

Meanwhile, here in the U.S., Disney’s CG-animated Moana easily topped the domestic box office for its second week in a row, taking in $28.4 million from 3,875 theaters for a total of $119.9 million in its first 12 days of release.

Coming in at number two domestically, Warner Bros.’ Fantastic Beasts and Where to Find Them continued to cast a spell in its third week at the box office. J.K. Rowling’s new spinoff prequel to the Harry Potter franchise made $18.5 million from 3,988 locations for an early domestic gross of $183.5 million.

Fantastic Beasts led the overseas box office for the third consecutive week in a row, earning $60.4 million from 67 markets for the weekend. The film has now made a total of $424.4 million overseas and $607.9 million globally. Notable territories include China with $72.5 million (including a $15.5 million weekend), the U.K. with $47.1 million, South Korea with $30.1 million, Japan with $28.6 million, and Germany with $23.7 million.

Paramount’s sci-fi feature Arrival came in third place, earning $7.3 million from 2,915 theaters over its fourth week out for a total of $73.1 million to date. The Denis Villeneuve-directed feature has made $21.6 million overseas for a new global tally of $94.6 million.

Marvel’s Doctor Strange came in fifth place for its fifth weekend in theaters, taking in $6.5 million from 2,935 locations for a total of $215.3 million. The effects-laden super hero movie directed by Scott Derrickson has made $419.6 million overseas for an early worldwide gross of $635.1 million.

DreamWorks Animation’s Trolls, also in its fifth week in wide release, once again came in sixth place with $4.6 million for a new domestic total of $141.4 million. Overseas the animated musical directed by Mike Mitchell and featuring the voices of Justin Timberlake and Anna Kendrick has made $165.3 million for a total of $306.8 million.