Paramount and Nickelodeon Movies' ‘Teenage Mutant Ninja Turtles’ makes its North American debut with $65 million, becoming the second August tentpole after ‘Guardians of the Galaxy’ to over perform. 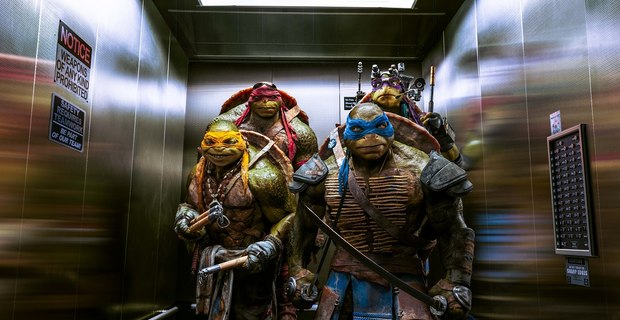 Heading into the weekend, the $125 million TMNT, directed by Jonathan Liebesman, was expected to debut in the $50 million to $55 million range. Produced by Bay's Platinum Dunes for Paramount and Nickelodeon, the film stars Megan Fox, Will Arnett, William Fichtner, Danny Woodburn, Abby Elliott, Noel Fisher, Jeremy Howard, Pete Ploszek, Alan Ritchson and Minae Noji, and is based on the characters created by Peter Laird and Kevin Eastman.

In the film, four outcast brothers rise from the sewer and discover their destiny as Teenage Mutant Ninja Turtles while working with a fearless reporter (Fox) to save New York City from Shredder and his evil Foot Clan.

The family friendly film easily bested Guardians to claim the number one spot domestically. Guardians held its own, however, falling 56 percent in its second weekend to $41.5 million for a domestic total of $175.9 million. Globally, the Marvel Studios and Disney tentpole passed the $300 million mark after earning another $40.1 million for a foreign total of $137.3 million and worldwide haul of $313.2 million.

In North America, Guardians and TMNT are helping to shore up the otherwise troubled summer box office, where revenue was down a steep 20 percent two weeks ago. Revenue is now down by 16.5 percent over a year ago, still a historic low.

New Line and Warner Bros.' tornado disaster film Into the Storm opened to $18 million. Costing less than $50 million to make, the found-footage movie was directed by Steven Quale. Overseas, the action film opened to $8.3 million from 20 markets for a world total of $26.3 million.

DreamWorks and Participant Media's dramedy The Hundred-Foot Journey, about dueling French and Indian chefs in a small French town, opened to $11.1 million. The $22 million film, directed by Lasse Hallstrom and based on the book by Richard C. Morais, is produced by Oprah Winfrey and Steven Spielberg and stars Helen Mirren.

Rounding out the top five was Luc Besson’s Lucy, which made $9.3 million for U.S. distributor Universal. Now in its third week at the box office, the sci-fi action film has made $97.4 million to date.

The weekend's fourth new nationwide film, Summit Entertainment’s Step Up All In, opened in sixth place to $6.6 million, a franchise low. The dance film is making up ground overseas, where it has earned $37.7 million for a worldwide total of $44.2 million.

Paramount and MGM's Hercules came in seventh place in its third week outing with $5.7 million for a domestic total of $ 63.5 million.

James Brown biopic Get On Up came in eighth place with $5 million, pushing the film’s total to $22.9 million. The film was produced for $30 million by Brian Grazer's Imagine Entertainment.

Fox's Dawn of the Planet of the Apes came in ninth place, grossing $4.4 million for a domestic total of $ 197.8 million.

Animated family sequel Planes: Fire & Rescue rounded out the list at number 10, taking in $2.4 million for a domestic total of $53 million.

At the specialty box office, James Cameron's Deepsea Challenge 3D, struggled badly in its debut, grossing $150,399 from 300 theaters for a location average of $496. National Geographic produced the documentary, which was directed by John Bruno and Ray Quint.