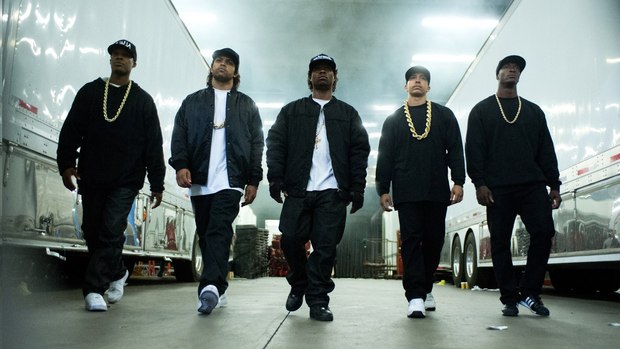 Universal's Straight Outta Compton led the pack at the North American box office this past weekend, taking in $60.2 million from 2,757 locations for its debut. Directed by F. Gary Gray, the modestly-budgeted N.W.A biopic, costing just $29 million to produce, registered the fifth-largest opening weekend performance ever in the month of August.

In second place, Paramount’s Mission: Impossible – Rogue Nation picked up $17 million in its third weekend, bringing the fifth film in the spy franchise’s North American haul to $138.1 million. Overseas M:I5 topped the charts for the third straight weekend, taking in $46.1 million from 62 territories for a new international total of $235.3 million and global tally of $373.437million.

Landing in third place, the weekend’s other new entry, Warner Bros.’ The Man From U.N.C.L.E. made $13.5 million from 3,638 theaters for its debut. That’s a rough start for the stylish Cold War-era film, which, directed by Guy Ritchie and starring Henry Cavill and Armie Hammer, cost a sizable $75 million to produce.

Fox’s Fantastic Four dropped steeply in its second weekend in theaters, falling nearly 70 percent from its debut to take in a meagre $8 million for a new domestic total of $42 million and a fourth place finish. Overseas Fantastic Four earned $16.2 million from 54 markets for a total of to $60.1 million internationally and $102.06 million worldwide.

Joel Edgerton's psychological thriller The Gift rounded out the top five, taking in $6.5 million for STX Entertainment this past weekend for a new domestic total of $23.6 million.

Marvel’s Ant-Man landed in sixth place, taking in $5.5 million for a new domestic total of $157.6 million. Overseas Ant-Man made an additional $5.6 million, lifting its overseas total to $189.5 million and its worldwide total to $347.1 million after five weekends of release. Ant-Man opens in South Korea on September 3 and in Japan on September 19.

From New Line and Warner Bros., Vacation landed in seventh place over its third weekend out, taking in $5.3 million for a new domestic total of $46.9 million.

Illumination Entertainment’s Minions came in eighth place with $5.2 million for a new domestic total of $313 million. Overseas Minions grossed an additional $15 million this weekend from 62 territories for an international total of $644.5 million and a worldwide total of $957.4 million. The Despicable Me spinoff is now the fifth highest grossing animated film of all-time worldwide behind Despicable Me 2 ($975.5 million), The Lion King ($987.5 million), Toy Story 3($1.064 billion), and Frozen ($1.28 billion).

Jonathan Demme's Ricki and the Flash, starring Meryl Streep, placed number nine in its second weekend out, with the TriStar/Sony movie taking in $4.6 million from 2,064 theaters for the for a new domestic total of $14.7 million.

Rounding out the list at number 10 is Universal’s R-rated Trainwreck. Starring Amy Schumer and directed by Judd Apatow, Trainwreck made $3.8 million over its fifth week out for a total of $97.9 million at the domestic box office.

Meanwhile, Aardman’s animated feature Shaun the Sheep continued to graze outside the top ten, taking in $2.9 million at the domestic box office for a total of $11.1 million and an 12th place finish.

Sony’s Pixels, landing at number 11 domestically with $3.4 million, scored $12.0 million from 80 overseas territories this past weekend, lifting the video game-centric film’s international cume to $91.1 million for a new worldwide total of $155.4 million.

Elsewhere, Pixar’s Inside Out made $11.4 million from 55 overseas markets for a new total of $327.6 million internationally and $667 million worldwide.

China’s Monster Hunt fell to second place, but still made a very respectable $11.8 million this past weekend. Accounting for China’s significant currency devaluation this week, the blockbuster has grossed $346.1 million in just over a month of release.