J.J. Abrams’ record-shattering ‘Star Wars’ reboot becomes the fastest title in history to hit $700 million, a feat accomplished in only 16 days versus the 72 days it took for ‘Avatar’ to reach the milestone. 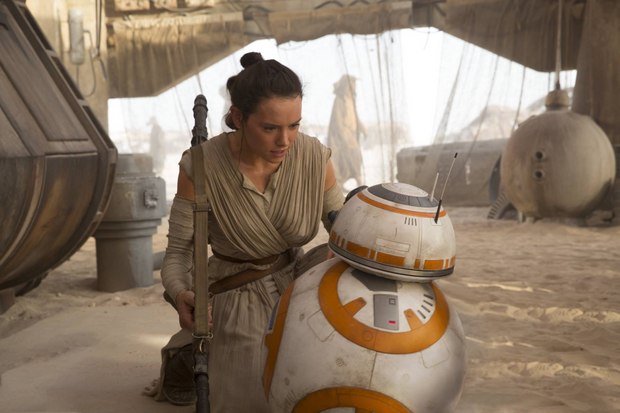 J.J. Abrams’ latest installment in the Star Wars saga, The Force Awakens, grossed $88.3 million in North America over New Year's weekend to close out the holidays with $740.3 million domestically and $1.51 billion globally for Disney and Lucasfilm. Domestically, it's the biggest third weekend in history for any film. The Force Awakens is just days away from overtaking Avatar ($760.8 million) to become the top-grossing film of all time in North America, not accounting for inflation. It should achieve the milestone sometime on Tuesday or Wednesday after becoming the fastest title in history to hit $700 million, a feat accomplished in only 16 days. The previous top earner, Avatar, took 72 days to reach this milestone.

Internationally, Abrams' blockbuster earned $96.3 million over the weekend for a foreign total of $770.5 million. On Saturday, it leapt past Avengers: Age of Ultron ($1.41 billion) to claim the number six spot on the list of all-time top-grossing films. Offshore, the movie is performing strongest in Europe and Australia, and is set to be a huge player in China when landing there January 9.

The Force Awakens remains a big draw in premium formats; IMAX theaters have racked up $152 million worldwide, the second best showing of all time behind Avatar ($243.3 million).

Daddy's Home stayed safely parked at number two throughout the holidays, closing out New Year's weekend with $29 million from 3,342 locations for a domestic cume of $93.7 million for partners Paramount and Red Granite Pictures. Overseas, Daddy's Home grossed $9.2 million from 15 markets for an early foreign cume of $21.9 million and global total of $115.6 million.

Quentin Tarantino's The Hateful Eight rode to number three after expanding nationwide midweek, earning $16.2 million for the weekend from 2,474 locations for an early domestic total of $29.6 million. From The Weinstein Co., Hateful Eight first debuted Christmas Day in an exclusive 70mm run.

Universal's R-rated comedy, Sisters, starring Tina Fey and Amy Poehler, placed number four with $15.6 million from 2,978 theaters for a domestic total of $61.7 million. Internationally, the comedy has earned $4.4 million from its first few markets for a total $66.1 million worldwide.

Twentieth Century Fox's Alvin and the Chipmunks: The Road Chip rounded out the top five with $11.8 million from 3,474 locations for a domestic total of $67.4 million. Overseas, Road Chip has grossed $91.7 million after earning $10.3 million overseas this weekend from 16 markets. Fellow Fox family entry The Peanuts Movie continued to make a solid showing offshore, earning $16.8 million from 44 markets for a foreign total of $77.1 million and global cume of $205.9 million.

The Big Short, the financial dramatic comedy directed by Adam McKay, followed in seventh place with $9 million from 1,585 locations for a total of $33 million. Starring Christian Bale, Steve Carell, Ryan Gosling and Brad Pitt, The Big Short will expand nationwide on January 8, timed to the Golden Globes ceremony. Paramount, New Regency and Pitt's Plan B teamed on the movie. Internationally, The Big Short has earned a promising $4.4 million so far from nine territories for a worldwide total of $37.4 million.

NFL drama Concussion, from Sony and Village Roadshow Pictures, came in at number eight with $8 million from 2,841 theaters for a domestic total of $25.4 million. The movie starring Will Smith debuted in Mexico, its first foreign market, to $1.3 million for an early total of $26.7 million worldwide.

Alcon Entertainment's big-budget extreme-sports movie Point Break, distributed by Warner Bros., placed number nine for the weekend with $6.8 million from 2,910 screens for a domestic total of $22.4 million. Made for $100 million, the stereoscopic 3D movie is a loose remake of the classic 1991 film starring Patrick Swayze and Keanu Reeves.

Rounding out the list at number 10 is The Hunger Games: Mockingjay, Part 2. The Lionsgate YA movie made $4.6 million from 1,485 locations over its seventh week in theaters for a new domestic total of $274.2 million. Overseas, the action sci-fi film directed by Francis Lawrence has made $361.7 million for a total of $635.9 million worldwide.