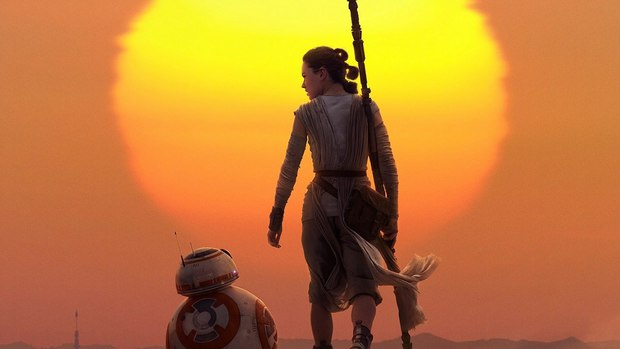 Seated firmly atop the box office chart, J.J. Abrams' record-shattering Star Wars: The Force Awakens earned $149.2 million over Christmas weekend in North America for a domestic total of $540.3 million. Overseas, the Star Wars reboot grossed an additional $550.3 million, rocketing past the $1 billion mark with a global cume of $1.09 billion through Sunday.

That represents the largest second weekend in history, and is by far the top holiday gross of all time. The previous Christmas weekend winner was Sherlock Holmes with a $62.3 million opening in 2009.

The Force Awakens has smashed one record after another since its debut. Add to that list becoming the fastest film in history to cross $1 billion at the worldwide box office, a feat it accomplished on Sunday, its 12th day in release. That compares to 13 days for Jurassic World, which boasted a day-and-date opening in China. (Star Wars doesn't open in China until January 9).

Domestically, Star Wars: The Force Awakens is now assured of eclipsing 2009's Avatar ($760.5 million) to become the top-grossing title of all time -- not accounting for inflation -- a record it could claim by the end of New Year's Eve weekend.

Sony and Village Roadshow's Concussion, starring Will Smith, opened in sixth place with an estimated $10.5 million from 2,841 theaters.

Concussion all but tied with The Big Short, directed by McKay and starring Christian Bale, Steve Carell, Ryan Gosling, Brad Pitt and Melissa Leo. The financial dramedy, playing in only 1,585 locations, exceeded expectations in grossing an estimated $10.45 million for the weekend and $14.5 million for the five days (it rolled out nationwide on Wednesday after a limited run). To date, Big Short has earned $16 million. Paramount teamed with New Regency and Pitt's Plan B Entertainment in making the $28 million movie, which will expand into more than 2,500 theaters on January 8.

At the specialty box office, Hateful Eight came in slightly ahead of Sunday estimates, earning $4.6 million from its exclusive 70mm roadshow in 100 theaters for a hearty location average of $46,069. The movie's performance so far is a needed win for The Weinstein Co., which spent millions to fulfill its promise to Tarantino to make the revenge Western available in film before opening Hateful Eight everywhere on December 31.

Revenant, starring Leonardo DiCaprio, also soared in its debut, grossing $474,562 from four theaters in New York and Los Angeles for a location average of $118,649, the second-best showing of the year to date. Twentieth Century Fox and New Regency are partners on the movie, which expands nationwide January 8.