In one of the best debuts ever for the month of February, Paramount and Nickelodeon Movies’ ‘The SpongeBob Movie: Sponge Out of Water’ soaks up $56 million for its domestic opening. 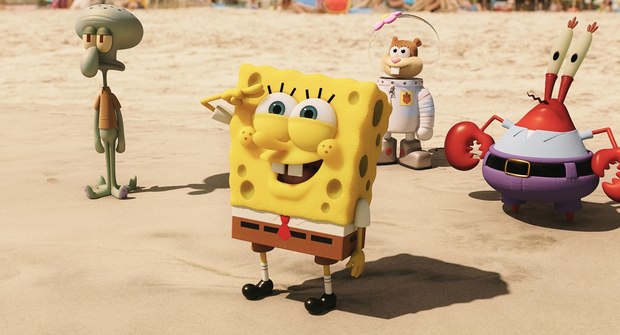 Giving new life to the family franchise, The SpongeBob Movie: Sponge Out of Water soaked up $56 million from 3,641 theaters in its North American debut, one of the best debuts ever in the month of February. Directed by Mike Mitchell and Paul Tibbitt, the new SpongeBob feature was produced with a budget of $74 million. The first SpongeBob movie, which was released in 2004, was made for $30 million and opened to $32 million before going on to make a total of $85.4 million domestically and $140.2 million worldwide.

Overseas, the Paramount and Nickelodeon Movies sequel is doing five times more business than the first film, grossing $26.8 million to date from 25 territories—including $11.1 million in Mexico—for an early worldwide total of $82.8 million.

The long-delayed Jupiter Ascending, starring Channing Tatum and Mila Kunis and directed by Lana and Andy Wachowski with a budget of $176 million, opened in third place with $19 million from 3,181 theaters. Showings in 3D accounted for roughly 52 percent of ticket sales.

That opening was around $10 million less than recent big-budget sci-fi movies such as Elysium ($29.8 million), Edge of Tomorrow ($28.8 million), After Earth ($27.5 million) and Ender's Game ($27 million), all of which were considered misses on opening weekend.

Jupiter Ascending won the overseas race with $32.5 million from 65 countries, however, faring best in Eastern Europe and Asia. Russia led with $4.7 million, followed by France with $2.3 million. Distributed by Warner Bros. and Australia's Village Roadshow Pictures, the space opera has yet to open in China, Japan and Australia.

Universal and Legendary Picture’s Seventh Son, starring Jeff Bridges and the Oscar-nominated Julianne Moore, performed poorly with $7.1 million from 2,875 locations and a fourth place finish for its debut. The film follows Bridges, the sole remaining warrior of a mystical order, as he travels to find the last Seventh Son, a prophesized hero born with incredible powers played by Ben Barnes. Reportedly made for $95 million, Seventh Son was written by Steven Knight and Charles Leavitt and directed by Sergei Bodrov.

Overseas, Seventh Son has already earned $83.6 million, including nearly $26 million in China, where Legendary East is releasing the movie and where the country's state-owned film company China Film Group made an eight-figure investment in the film.

Rounding up the top five is StudioCanal’s Paddington. The family-friendly adventure made $5.4 million for U.S. distributor The Weinstein Co., pushing the film’s domestic total to $57.3 million. Overseas Paddington has made an additional $4.9 million, pushing the live-action/CG hybrid film’s foreign tally to $150.9 million for a total of $208.1 million globally.

Paramount’s found-footage film Project Almanac came in sixth place on its second week at the box office, taking in $5.3 million for a domestic total of $15.8 million. Made for $12 million, the time travel movie was directed by Dean Israelite.

The Weinstein Co.’s The Imitation Game once again landed in seventh place, adding $4.9 million in its 11th week at the domestic box office for a total of $74.7 million. The British drama, starring Benedict Cumberbatch, has made a total of $64.7 million overseas for a worldwide tally of $139.4 million.

Now in its third week out, Kevin Hart and Josh Gad's The Wedding Ringer made $4.8 million for a domestic total of $55.1 million and an eighth place finish. Screen Gems made the R-rated comedy for $23 million.

Mike Binder's racially charged drama Black or White, starring Kevin Costner and Octavia Spencer, came in ninth place over its sophomore weekend with $4.5 million for a domestic total of $13.1 million. Distributed by Relativity, the film was independently finnanced for $9 million.

Rounding out the list at number 10 is Universal’s The Boy Next Door, which made $4.1 million for a domestic total of $30.9 million.

Elsewhere, Disney's Oscar-nominated Big Hero 6 jumped the $500 million mark this weekend, thanks to a heroic run in Japan, where it has now earned $66.7 million. The Walt Disney Animation Studios title has earned $218.6 million domestically and $286.6 million internationally for a global tally of $505.1 million.