Sony's The Amazing Spider-Man 2 kicks off the summer box office in style, bringing in $92 million domestically for its debut; Fox comedy The Other Woman comes in second place with $14.2 million. 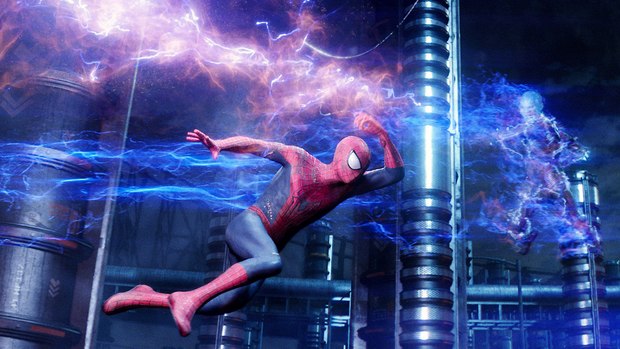 Sony's The Amazing Spider-Man 2 kicked off the summer box office in style, bringing in $92 million for its debut.

Internationally, where the superhero sequel began opening two weeks ago, the movie took in an estimated $116 million for a foreign total of $277 million and global haul of $369. Director Marc Webb reteamed with stars Andrew Garfield and Emma Stone to make the sequel, which features an array of new cast members, including Jamie Foxx as the villain Electro and Dane DeHaan as Harry Osborn, Spider-Man's friend turned nemesis. Paul Giamatti plays Rhino.

Amazing Spider-Man 2 generated $9.3 million in ticket sales from 353 IMAX theaters, and $7.3 million from large-format screens, led by Cinemark. All of the film's top five locations were IMAX theaters. Overseas, IMAX theaters have racked up nearly $16 million in sales.

Fox comedy The Other Woman came in second place at the North American box office, taking in $14.2 million over its sophomore weekend for a domestic total of $47.3 million. Overseas, the Cameron Diaz and Leslie Mann comedy took in another $19.5 million from 49 markets for an international total of $45.8 million.

Sony's Christian film Heaven Is for Real came in third, grossing $8.7 million in its third outing for a total of $65.6 million.

Captain America: The Winter Soldier hit nearly $680 million in global ticket sales, grossing $7.8 million in North America for a fourth-place finish. Now in its fifth week out, The Disney and Marvel tentpole has earned $237.1 million domestically and $442.7 million internationally for a worldwide total of $679.8 million.

Fox's Rio 2 crossed the $100 million mark in its fourth weekend, grossing $7.6 million for a domestic total of $106.5 million and coming in number five. Overseas, the animated film delivered $24.5 million from 58 markets for a foreign total of $289.1 million.

Brick Mansions, the late Paul Walker's second-to-last film before Fast & Furious 7, came in sixth place, taking in $3.5 million for a total of $15.5 million. From Luc Besson's EuropaCorp and Transfilm International, Brick Mansions cost $28 million to make. Written by Besson, the film is being released by Relativity in the U.S.

Now in its seventh week out, Summit Entertainment's Divergent came in seventh place at the box office, grossing $2.2 million for a domestic total of $142.7 million.

Horror title The Quiet Ones, now in its second week at the box office, came in eighth place, taking in $2 million for a total of $6.8 million. From Lionsgate and Exclusive Media, The Quiet Ones was directed by John Pogue and stars Jared Harris, Sam Claflin and Olivia Cooke.

Rounding out the list at number 10, Wes Anderson's The Grand Budapest Hotel continued to shine for Searchlight as it crossed the $50 million mark in North America, grossing $1.7 million from 884 locations in its ninth weekend for a domestic total of $51.5 million. Internationally, Grand Budapest Hotel has earned $89 million to date.

Frozen continued its fantastic run in Japan, where the animated musical added $11.1 million in its eighth weekend in theaters. To date, the Disney feature has grossed $143.2 million in Japan, and should continue to put up strong numbers for weeks to come. On a worldwide basis it reached $1.17 billion, and is now around $46 million away from topping Iron Man 3.