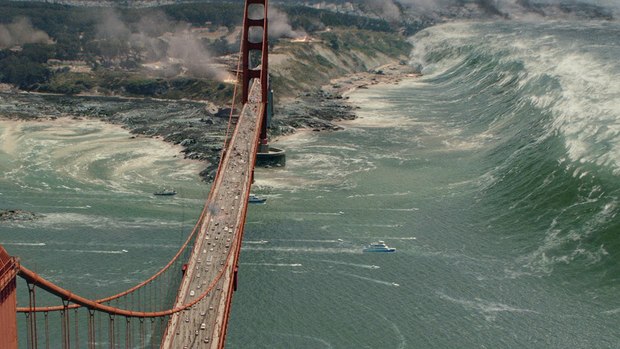 Warner Bros.’ San Andreas demolished the competition this past weekend, topping the North American box office with a $53.2 million debut. Overseas, San Andreas also rocked the foreign box office, grossing $60 million from 60 markets for a global bow of $113.2 million. Directed by Brad Peyton, the Dwayne Johnson-led disaster film was co-financed and co-produced by Warner Bros. and Village Roadshow for $110 million. The film, in which Johnson plays a helicopter pilot called upon to execute multiple nick-of-time rescues, is the former wrestling star’s top opening outside of the Fast and Furious franchise, and the highest ever for a title in which he is the solo lead.

Now in its third week out, Universal’s Pitch Perfect 2 once again came in second place with $14.8 million, pushing the musical comedy’s domestic haul to $147.5 million. Internationally, the sequel brought in $10.4 million from 46 territories for a worldwide haul of $228.2 million.

Brad Bird’s Tomorrowland came in third place in its sophomore weekend, taking in $13.8 million for a new domestic total of $63.2 million. The big-budget fantasy adventure, starring George Clooney and Britt Robertson and costing Disney $180 million to produce, has made a total of $70 million overseas for a total of $133.2 million worldwide.

Mad Max: Fury Road, from Warner Bros. and Village Roadshow Pictures, came in fourth place for the weekend, bringing in $13.6 million for a new domestic total of $115.9 million. Overseas, George Miller’s post-apocalyptic action movie took in an additional $21.6 million from 70 markets for a new international total of $165 million and worldwide cume of $280 million.

Marvel’s Avengers: Age of Ultron rounded out the top five with $10.9 million for a new domestic total of $427.1 million. Now in its fifth week at the box office, the Disney film also made an additional $17.6 million overseas, pushing the super hero movie’s international total to $894.2 million for a total haul of $1.3 billion globally.

MGM and Fox 2000’s Poltergeist came in seventh place for its sophomore weekend, taking in an addiitonal $7.8 million for a new domestic total of $38.3 million. The horror remake of the 1982 cult classic has made a total of $8.3 million at the foreign box office for a new global tally of $46.6 million.

Fox Searchlight’s Far From the Madding Crowd, directed by Thomas Vinterberg, came in eighth place with $1.4 million for a new domestic total of $8.4 million. The specialty box office film has made a total of $10.2 million overseas for a total of $18.6 million worldwide.

MGM and New Line’s Hot Pursuit, starring Reese Witherspoon and Sofia Vergara, placed ninth in its third weekend out with $1.4 million for a new domestic total of $32.4 million. Directed by Anne Fletcher, the female-skewing comedy was produced for $35 million, and has made $1.4 million overseas for a total $33.8 million globally.

Rounding out the list at number 10 is DreamWorks Animation’s Home, which made $1.2 million over its 10th weekend at the domestic box office for a total of $170.4 million. Overseas the animated family film has made a total of $193 million, pushing its worldwide total to a whopping $363.4 million.