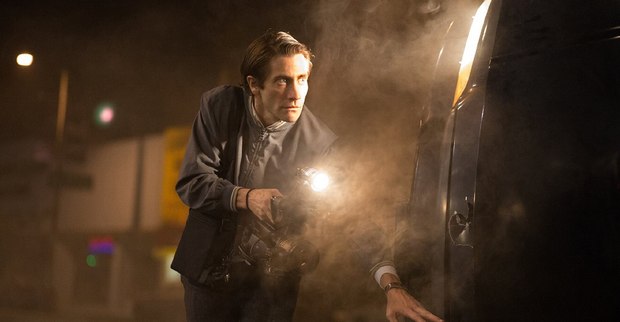 Based on the classic Hasbro board game, Ouija grossed $10.7 million on its sophomore outing, pushing the film’s 10-day domestic total to $34.8 million for Universal, Jason Blum's Blumhouse and Michael Bay's Platinum Dunes. Overseas, the teen-friendly horror title grossed another $5.7 million internationally from 19 territories, including a number one finish in the U.K. with $2.2 million, for an early foreign total of $7.7 million.

The critically acclaimed Nightcrawler, playing in 2,766 locations, made $10.4 million for its debut. Produced and financed by Bold Films and distributed by Open Road Films, the indie crime-thriller starring Gyllenhaal as an ambitious and troubled freelance journalist taking on L.A.'s underground crime scene was directed by Dan Gilory with a budget of $8.5 million. Overseas, Nightcrawler opened in a handful of markets, earning $1.8 million for an early global total of $12.2 million.

Sony's Fury once again came in third place, taking in $9.1 million in its third weekend out to push the film’s domestic total to $60.4 million. Overseas, the WWII feature starring Brad Pitt took in $14.6 million for a foreign total of $37.8 million and global haul of $75 million.

Now in its fifth week at the box office, David Fincher's Gone Girl came in fourth place, grossing $ $8.8 million for a domestic total of $136.6 million. Gone Girl jumped the $100 million mark internationally after earning $18.4 million from 60 markets for a foreign total of $118.3 million and global haul of $242.4 million.

Rounding up the top five is Reel FX’s The Book of Life, directed by Jorge R. Gutierrez and produced by Guillermo del Toro. Distributed by Fox, the animated feature took in $ $8.3 million for the Halloween weekend for a domestic total of $40.5 million. Overseas, The Book of Life -- budgeted at $50 million -- has brought in $28.8 million for a worldwide total of $69.3 million.

John Wick, from Lionsgate, came in sixth place over its second weekend in wide release with $8.1 million from 2,589 theaters for a domestic total of $27.6 million. Directed by Chad Stahelski, the R-rated action picture stars Keanu Reeves as an ex-hitman who comes out of a peaceful retirement to hunt down the gangsters who killed his puppy. Overseas the film made an additional $8 million for a worldwide total of $35.6 million.

Disney's Alexander and the Terrible, Horrible, No Good, Very Bad Day placed number eight in its fourth weekend, bringing in $6.5 million for a domestic total of $ 53.6 million.

Robert Downey Jr.'s courtroom dramedy The Judge came in ninth place for the second week in a row, bringing in an additional $3.4 million for Warner Bros. and Village Roadshow Pictures for a total of $39.5 million.

Universal and Legendary Pictures' Dracula Untold once again rounded up the top 10 with $2.9 million for a domestic total of $52.9 million. Overseas, the origins film directed by Gary Shore added $12.4 million for a new foreign total of $136.1 million. Globally, the film has made $166 million.

Elsewhere, Teenage Mutant Ninja Turtles wowed with a China debut of $26.5 million for an international weekend take of $34.7 million and foreign total of $244 million. Globally, the Paramount title has now earned $434.5 million.

Fox's YA film adaptation The Maze Runner also launched in China, taking in $13.7 million to jump the $200 million mark internationally and the $300 million mark globally (the film's gross through Sunday is $306.5 million).

Disney's newest animated feature Big Hero 6 continued to please in Russia, where it opened early to take advantage of school holidays and has earned $10.3 million in its first nine days. In North America, Big Hero 6 opens November 7 opposite Paramount’s Interstellar.