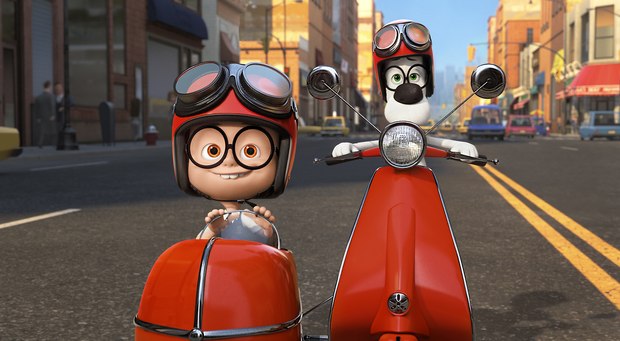 Animated holdover Mr. Peabody & Sherman topped the North American box office charts this weekend, taking in $21.2 million from 3,951 theaters for a solid 10-day domestic total of $63.2 million for DreamWorks Animation and 20th Century Fox. The 3D animated film took in $15.3 million internationally for the weekend for a global total of $148.8 million.

DreamWorks Pictures' new Aaron Paul racing movie Need for Speed stalled in its North American debut, coming in third with $17.8 million. Need for Speed, directed by Scott Waugh, is adapted from the wildly popular Electronic Arts game, which has racked up sales in the $4 billion range.  Playing in 3,115 theaters, the film was on track to open in the $25 million to $30 million range domestically. Overseas -- where Mister Smith Entertainment is handling the film in Europe and the Middle East -- Need for Speed earned $5.5 million in Russia, $3.5 million in the U.K., $1.9 million in Malaysia, $1.4 million in Australia and $1.3 million in Brazil for an international total of $45.6 million.

In its third week at the box office, Universal’s Liam Neeson thriller Non-Stop came in fourth place, bringing in $10.6 million for a domestic total of $68.8 million.

Warner Bros. and Village Roadshow’s The Lego Movie grossed $7.7 million to come in sixth place, ending Sunday with a domestic total of $236.9 million. Overseas, the animated hit earned another $4.7 million from 52 territories for an international total of $141.5 million and global haul of $378.4 million.

Christian film Son of God took came in seventh place at the North American box office, grossing $5.4 million and crossing the $50 million mark with a total of $50.9 million.

At the specialty box office, Wes Anderson's The Grand Budapest Hotel came in eighth place, grossing $3.6 million as it expanded from four to 66 theaters in its second weekend. From Fox Searchlight, the boasts an early domestic total of $4.8 million with a location average of $55,152 -- the best of the weekend by far. Overseas, Grand Budapest Hotel, starring Ralph Fiennes, earned another $6.7 million from 13 markets for an early total of $20 million.

The unstoppable Frozen came in ninth place with $2.1 million for a domestic total of $396 million. Worldwide, the Disney film has now earned $1.026 billion worldwide, surpassing fellow Disney title Alice in Wonderland ($1.025 billion) and The Hobbit: An Unexpected Journey ($1.017 billion) to become the number 15 top-grossing title of all time.

Rob Thomas' Veronica Mars, the feature based on the Kristen Bell TV series that was made a reality after a $5.7 million fundraising campaign on Kickstarter, grossed $2 million to tie with The Monuments Men to round out the list at number 10. In a move unheard of for Hollywood studio, the film was also made available to buy or rent online. Meanwhile, George Clooney's The Monuments Men boosted its domestic total to $73.8 million. Worldwide, it has now earned $128 million after earning another $8.2 million internationally.