Lionsgate's ‘The Hunger Games: Mockingjay -- Part 1’ rules the box office both domestically and overseas, posting the top opening of the year domestically and grossing $275 million worldwide. 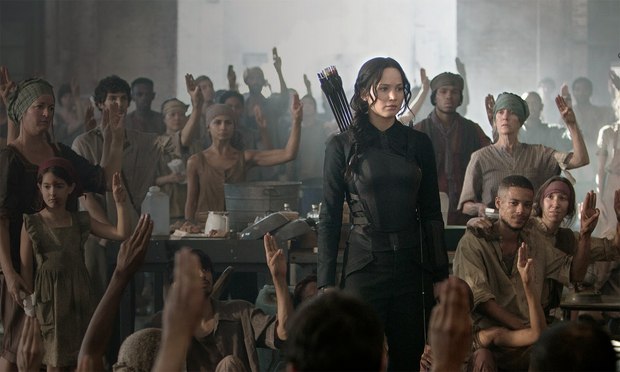 Lionsgate's The Hunger Games: Mockingjay -- Part 1 ruled the box office this past weekend, both domestically and overseas, grossing $275 million worldwide.

Taking in $123 million from 4,151 locations, Mockingjay blasted past Paramount’s Transformers: Age of Extinction to post the top opening of the year domestically, but trailed the first two installments in the YA franchise by a hefty margin. One year ago The Hunger Games: Catching Fire saw a $158.1 million debut, while the March 2012 debut of The Hunger Games made $152.5 million.

Disney's animated family film, the Marvel-inspired Big Hero 6, came in number two in its third weekend out with $20.1 million for a domestic total $135.7 million. Overseas, the animated tentpole took in another $7 million from its first 23 markets for an early foreign total of $49.5 million and a worldwide haul of $185.2 million.

Paramount and Warner Bros.' Interstellar approached the $450 million mark worldwide, grossing $15.1 million in its third outing for a North American cume of $120.7 million and global total of $449.7 million. Internationally, Christopher Nolan's Interstellar racked in another $70 million from 64 territories, pushing its foreign total to $329 million, 13 percent of ahead of last year’s space epic, Gravity, and 10 percent ahead of Nolan's Inception.

After topping the domestic chart last weekend, Dumb and Dumber To fell a steep 62 percent in North America, grossing $13.8 million for a domestic total of $57.5 million and a fourth place finish.

In its eighth week in release, David Fincher's Gone Girl rounded out the top five, ending Sunday with north of $156 million domestically.

Coming in sixth place is Relativity’s Beyond the Lights, which made an additional $2.6 million, pushing the romance drama’s domestic total to $10.1 million.

Bill Murray's comedy St. Vincent -- from The Weinstein Co. and Chernin Entertainment -- came in seventh place with $2.4 million for a total of $36.6 million.

Sony's Fury came in eighth place, taking in $1.9 million in its sixth weekend out to push the film’s domestic total to $79.2 million. The Brad Pitt-starring feature pulled in $12.4 million internationally for a foreign total of $74.4 million and worldwide total of $153.6 million.

Rounding out the list at number 10 is Focus Features' Stephen Hawking biopic The Theory of Everything. The film did impressive business as it expanded into 140 theaters in its third weekend, grossing $1.5 million for a total of $2.8 million.

In China, DreamWorks Animation's Penguins of Madagascar -- now in its second week of play -- made $8.7 million for a total of $23.3 million. The family tentpole opens in North America on November 26.