Taking first place at the North American box office with a $115.2 million debut, Illumination Entertainment’s ‘Despicable Me’ spinoff scores the second-biggest opening weekend of all time for an animated title. 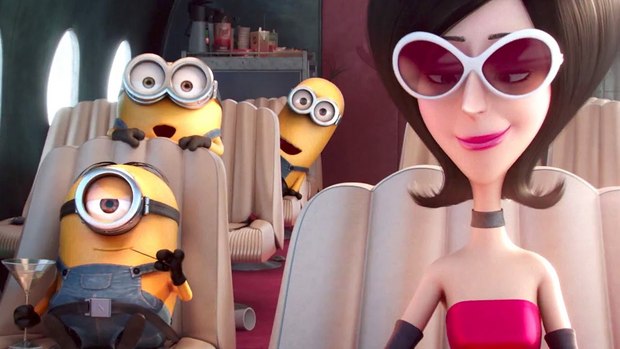 ‘Minions’ takes first place at the North American box office with the second-biggest opening weekend of all time for an animated title, behind DreamWorks Animation’s ‘Shrek the Third.’

Banana. Illumination Entertainment’s Minions arrived in the U.S. this past weekend, taking first place at the North American box office with a $115.2 million debut, the second-biggest opening weekend of all time for an animated title, not accounting for inflation. Overseas, where it began rolling out two weekends ago, the family title also placed number one, earning $124.3 million from 56 markets for a foreign total of $280.5 million and early global cume of $395.7 million.

Illumination and Universal spent a modest $74 million to make the Despicable Me prequel, which was directed by Pierre Coffin and Kyle Balda, and follows the minions as they attend Villain-Con in Florida and find a new master in Scarlett Overkill, voiced by Sandra Bullock. The voice cast also includes Pierre Coffin, Jon Hamm, Michael Keaton, Allison Janney, Steve Coogan and Geoffrey Rush.

DreamWorks Animation’s Shrek the Third ($122.5 million) is still in the lead for the biggest three-day debut of all time. Minions, playing in 4,301 theaters, beat out Pixar’s Toy Story 3, which made $110.3 million when it was released in 2010. Only one other animated film, Shrek 2 ($108 million), has crossed $100 million in its first weekend.

Universal's Jurassic World came in second place in its fifth weekend with $18.1 million from 3,441 locations for a new domestic total of $590.7 million. The dinosaur movie is poised to become only the fourth film in history to cross the $600 million mark domestically after Avatar ($760.5 million), Titanic ($658.7 million) and The Avengers ($623.4 million).

Pixar and Disney's Inside Out placed third in its fourth weekend with $17.1 million from 3,644 theaters for a domestic total of $283.6 million. Overseas, where the animated tentpole is rolling out slowly, Inside Out grossed $19.1 million from 44 territories for a global take of $435.4 million.

Paramount and Skydance's Terminator: Genisys came in fourth place, earning $13.7 million in its sophomore weekend from 3,783 locations for a new domestic cume of $68.7 million. Internationally, Genisys grossed $47.3 million from 60 markets for a foreign cume of $156.1 million and worldwide total of $224.8 million.

Rounding up the top five, Blumhouse and Entertainment 360's micro-budget horror film The Gallows opened to $10 million from 3,376 locations. Overseas, it took in $1.3 million from its first 13 markets. The movie, distributed by New Line and Warner Bros., was directed by Travis Cluff and Chris Lofing with a budget of less than $1 million. It centers on students who resurrect a failed high school play 20 years after a horrific accident in a small town.

Warner Bros.’ Magic Mike XXL earned $9.6 million from 3,376 theaters in its sophomore session for a North American total of $48.4 million. Overseas, the comedy grossed $10.3 million from 30 markets for a foreign cume of $20.5 million and global total of $68.9 million.

Universal's R-rated Ted 2 came in seventh place, taking in $5.5 million at the North American box office for a new domestic total of $71.5 million. Overseas, the Seth MacFarlane-directed comedy sequel made $12.4 million from 35 territories over the weekend, including a $6 million debut and number-two finish in the U.K., for a total of $53.2 million internationally and $124.8 million worldwide.

This weekend's third new offering was Gramercy Pictures' $26 million sci-fi thriller Self/less, which opened to $5.4 million from 2,353 theaters for an eighth-place finish. Starring Ryan Reynolds and directed by Tarsem Singh, the indie movie, from Endgame Entertainment and FilmDistrict, revolves around a dying wealthy man whose consciousness is transformed into the body of a healthy young man.

MGM’s canine hero movie Max came in ninth place, taking in $3.4 million over its third weekend out for a new domestic total of $33.7 million.

Now in its sixth week in theaters, Paul Feig's action-comedy Spy, starring Melissa McCarthy, rounded up the top 10 with $3 million for distributor Fox for a new domestic total of $103.4 million. Overseas, Spy added $1.7 million over the weekend to reach a $116.4 million overseas total and $219.9 million worldwide.