Illumination Entertainment's ‘Minions’ beats the lifetime totals of ‘Despicable Me 2’ ($975.5 million) and ‘The Lion King’ ($987.5 million) to become the third-highest-grossing animated film of all time worldwide. 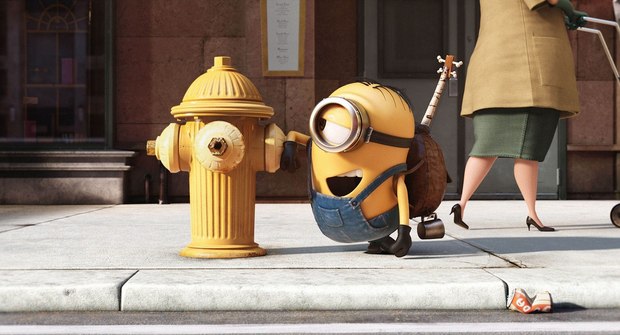 Illumination's ‘Minions’ beats ‘Despicable Me 2’ and ‘The Lion King’ to become the third-highest-grossing animated film of all time worldwide.

Universal’s Straight Outta Compton landed at the top of the North American box office for the second weekend in a row, beating out three new contenders with a $26.8 million take for a new domestic total of $111.5 million.

In second place, Paramount’s Mission: Impossible – Rogue Nation picked up $11.7 million in its fourth weekend in theaters, bringing the fifth film in the spy franchise’s North American haul to $158 million. Overseas M:I5 also took the number-two spot, earning $25.2 million from 63 territories for a new international total of $280.8 million and global tally of $438.6 million.

Following its debut in China, Paramount and Skydance's Terminator Genisys took the number-one spot internationally, earning $27.4 million from 25,000 locations and marking the fourth-largest opening day ever for a U.S. film behind Fast 7, Avengers: Age of Ultron and Transformers 4. Terminator Genisys’ international tally is now $264 million for a total $335 million worldwide.

The weekend’s first new entry, Sinister 2, produced by Blumhouse for less than $10 million and released by Focus Films’ genre label Gramercy Pictures, came in third place with a $10.6 million debut. The micro-budgeted horror film about a mother and her two sons who move into a rural house that's inhabited by an evil deity is directed by Ciaran Foy from a script by franchise creators Scott Derrickson and C. Robert Cargill.

Warner Bros.’ period spy film The Man From U.N.C.L.E was able to crack the top five in its second outing, earning $7.4 million domestically. The Guy Ritchie film, which had a soft debut last weekend, has made $26.6 million domestically to date. Overseas, The Man From U.N.C.L.E brought in an additional $8 million from 39 overseas markets for a total of $52.64 million worldwide.

This weekend's final wide release, the stoner action comedy American Ultra, starring Jesse Eisenberg and Kristen Stewart, landed in sixth place with a $5.5 million debut. Lionsgate acquired American Ultra ahead of production for $7 million. The film centers on a stoner (Eisenberg) who discovers he's a sleeper CIA assassin, and was originally projected to earn between $6 million and $8 million in its debut.

In seventh place, Joel Edgerton's psychological thriller The Gift took in $4.3 million over its third weekend in theaters for distributor STX Entertainment for a new domestic total of $31 million.

Marvel’s Ant-Man came in eighth place, taking in $4 million at the domestic box office for a new North American total of $164.5 million in North America. Overseas Ant-Man made an additional $2.9 million, lifting its overseas total to $196.5 million and its worldwide total to $361 million after six weeks of release. Ant-Man opens in South Korea on September 3 and in Japan on September 19.

Universal and Illumination's Minions, which came in ninth place domestically, grossed an estimated $8.8 million in 57 territories this weekend for a new international total of $669.4 million. The animated feature’s worldwide total is now $989.4 million, beating the lifetime totals of Despicable Me 2 ($975.5 million) and The Lion King ($987.5 million) to become the third-highest-grossing animated film of all time worldwide.

Rounding out the list at number 10, Fox’s Fantastic Four took in $3.6 million from 2,581 theaters over its third weekend at the box office for a new domestic total of $49.6 million. Overseas Fantastic Four earned $16.2 million from 65 territories for a total of to $80.8 million internationally and $130.4 million worldwide.

Aardman’s Shaun the Sheep, now in its third week of release, continued to graze outside the top 10, taking in $1.5 million for distributor Lionsgate for a new domestic total of $14.5 million. Overseas the stop-motion animated feature has made $59.7 million internationally for a total of $74.2 million worldwide.

Elsewhere, Pixar’s Inside Out continued to do big business, earning $10.7 million from 60 overseas territories for a new total of $347.5 million internationally and $689.924 million worldwide. Inside Out is the fifth-highest grossing Pixar release worldwide behind Up with $731.3M. The animated feature lands in Italy on September 16 and Germany on October 1. China has yet to set a release date.

Universal’s Jurassic World made $5.7 million over this past weekend at the overseas box office for a new international total of $983.3 million. In Japan, where the film continues to dominate, Jurassic World has made a total of $48 million over its 17-day run. The dinosaur blockbuster is now the fourth-highest grossing film of all-time overseas with a total of $983.3 million and the third-highest-grossing film of all-time worldwide with $1.62 billion.