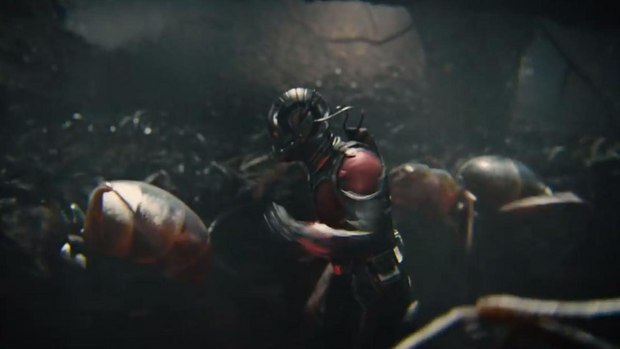 Marvel’s Ant-Man, starring Paul Rudd as the world's tiniest super hero, easily claimed the top spot in North America this past weekend, taking in $58 million for its debut. This marks the second-lowest debut for Marvel Studios since it went solo and launched its cinematic universe, beginning with Iron Man ($98.6 million) in May 2008. Only The Incredible Hulk opened lower ($55.4 million).

Directed by Peyton Reed, Ant-Man stars Rudd as ex-con Scott Lang who, armed with a super-suit with the ability to shrink in scale but increase in strength, attempts to pull off a heist that will save the world. The superhero film, costing $130 million to produce, also stars Michael Douglas and Corey Stoll.

Overseas Ant-Man earned $56.4 million from its first 37 markets, well ahead of the first Captain America movie and Thor, putting Ant-Man's global bow at $114.4 million. Internationally, it placed behind the debut of Monster Hunt in China, which earned a massive $72 million, Minions ($66.2 million) and Chinese film Jian Bing Man ($61 million).

Illumination Entertainment and Universal holdover Minions took in $50.2 million in its second weekend for a domestic total of $216.7 million and a second place finish. The Despicable Me-spinoff continued its strong run overseas, grossing $66.2 million from 56 territories for an international total of $409.1 million and $625.8 million worldwide.

Amy Schumer's female-fueled R-rated comedy Trainwreck landed in third place for its debut, taking in $30.2 million for distributor Universal. The Emmy-nominated Schumer stars in and wrote Trainwreck, which was directed by of Judd Apatow. Costing a modest $35 million to make, Trainwreck is the fifth film directed by Apatow and the first he didn't also write. The story centers on Schumer's character, a commitment-phobic career woman who doesn't believe in monogamy, who may have to face her fears when she meets a good guy. Bill Hader and LeBron James also star.

Pixar and Disney's Inside Out placed fourth in its fifth weekend out, grossing $11.7 million to jump the $300 million mark domestically with a total of $306.4 million through Sunday and a global tally of $490.1 million. Inside Out expanded into Japan, Netherlands, and Spain this past weekend, grossing $21.3 million from 48 territories. Director Pete Docter’s animated feature has earned $183.8 million overseas and $490.2 million worldwide.

Now in its sixth outing, Jurassic World rounded out the top five with $11.4 million for a domestic total of $611.1 million for Universal. Internationally, the blockbuster jumped the $900 million mark to finish Sunday with an estimated $1.5 billion, overtaking fellow Universal title Furious 7 to become the number four title of all time.

Paramount and Skydance's Terminator: Genisys came in sixth place, earning $5.4 million in its sophomore weekend from 3,783 locations for a new domestic cume of $80.6 million. Internationally, Genisys grossed $22.2 million from 64 international markets, lifting its international cume to $196.8 million and its global haul to $277.44 million.

In seventh place, Warner Bros.’ Magic Mike XXL earned $4.5 million from 3,376 theaters in its fourth weekend at the box office for a North American total of $58.6 million. Overseas, the comedy grossed $5.8 million over the weekend in 40 territories. To date, the Warner Bros’ sequel has grossed $31 million overseas and $89.6 million worldwide.

Universal's R-rated Ted 2 came in ninth place, taking in $2.4 million at the North American box office for a new domestic total of $77.4 million. Overseas, the Seth MacFarlane-directed comedy sequel brought in $7.5 million from 43 territories for an overseas total of $66 million and a worldwide cume of$143.4 million.

Elsewhere, the China the box office, currently under blackout from Hollywood films, hit a record $183 million in ticket sales from Friday to Sunday and $282 million for the week. The China box office was led by live-action/CG hybrid family feature Monster Hunt, directed by Shrek animation supervisor and Shrek the Third co-director Raman Hui. Monster Hunt grossed a massive $79.7 million over the weekend, earning $107.4 million since opening on Thursday. The film will open on July 24 in select U.S. cities through Magnum Films.

Animated feature Monkey King: Hero Is Back, also grossed an outstanding $25.7 million this weekend despite heavy competition from Monster Hunt. The locally produced 3D animated action/family adventure film has grossed $75 million to date and is on its way to becoming the highest grossing animated film in Chinese box office history, currently held by Kung Fu Panda 2 with $93.19 million.