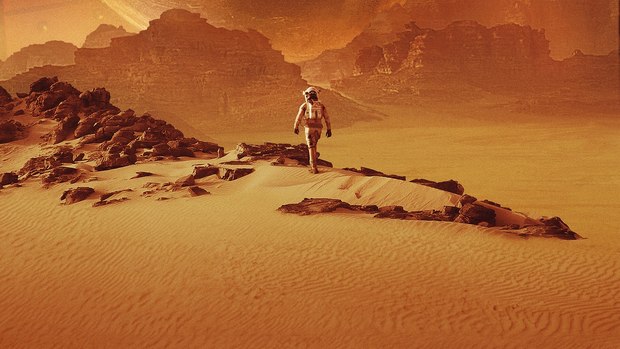 Several new releases entered the North American box office race this past weekend but failed to meet expectations, leaving Ridley Scott's The Martian, Sony's family film Goosebumps and Steven Spielberg's Cold War drama Bridge of Spies at the top of the of the chart.

The Martian, from Fox, reclaimed the top position in its fourth weekend, narrowly beating Goosebumps with $15.9 million from 3,504 theaters for a domestic total of $166.4 million. The sci-fi space epic also dominated offshore, earning another $30 million from 72 markets to rocket past the $200 million mark for a global cume of $384.4 million.

Domestically, Goosebumps grossed $15.5 million from 3,501 locations in its second outing for a total of $43.7 million and a second place finish. Internationally, the movie earned $5.8 million from 24 markets for an early foreign cume of $9.2 million and worldwide tally of $53.1 million.

Bridge of Spies, made for $40 million by partners DreamWorks, Participant Media and Disney, held up well in its second weekend, coming in third place with $11.4 million from 2,811 theaters for a 10-day domestic total of $32.6 million. Fox is handling the historical drama starring Tom Hanks in many markets overseas, where it brought in an additional $5 million from 23 international territories for an early global cume of $39.7 million.

Among new entries, The Last Witch Hunter came in fourth place with $10.8 million from 3,082 theaters, marking a poor start for the Lionsgate movie. Starring Vin Diesel as an immortal witch hunter who attempts to stop a plague from destroying New York City, The Last Witch Hunter was directed by Breck Eisner and produced for between $75 million to $80 million. Although it has yet to roll out in a number of major territories, overseas the film has made $13.4 million from 53 markets for an early global total of $24.2 million.

Sony’s Hotel Transylvania 2 rounded up the top five for the second weekend in a row, taking in $9 million from 3,154 domestic locations for a total of $148.3 million. Overseas the animated sequel came in second at the international box office, earning an additional $28.7 million to race past the $300 million mark globally and finish Sunday with $315.8 million in worldwide ticket sales.

Warner Bros.’ Pan once again came in sixth place for its third weekend in theaters, bringing in $8 million from 1,656 theaters for a total of $29.8 million at the domestic box office. Overseas, the big-budget fantasy film directed by Joe Wright picked up $12.3 million from 61 territories, lifting its overseas cume to $63.6 million and worldwide total to $93.4 million.

Marking a franchise low, Paranormal Activity: Ghost Dimension landed in seventh place for its debut with $8.2 million from 2,493 theaters. The 3D horror film, produced by Blumhouse for $10 million, will be available in homes earlier than usual due to an unusual deal between Paramount, AMC and Canada's Cineplex Entertainment. Overseas, the sixth and final installment of the Paranormal Activity franchise made $18 million from 23 markets for a total of $26.1 million worldwide.

Landing in eighth place is Universal’s Steve Jobs, directed by Danny Boyle and starring Michael Fassbender as the legendary and controversial Apple co-founder. The $30 million biopic made $7.3 million from 2,493 theaters for its North American debut for an early domestic total of $10 million over its first 10 days.

Nancy Meyers’ comedy The Intern, starring Anne Hathaway and Robert De Niro, came in ninth place over its fifth weekend out, taking in $3.9 million from 2,061 theaters for distributor Warner Bros. for a new domestic total of $64.7 million.

Rounding out the list at number 10 is Christian drama Woodlawn, which made $3.1 million over its sophomore weekend from 1,475 theaters for a new domestic total of $8.5 million for Pure Flix Entertainment.

Elsewhere, Blumhouse and Universal's Jem and the Holograms, based on the popular '80s cartoon about teenage girls who become pop performers, landed the worst opening of all time for a major studio release going out in 2,000 or more theaters. The live-action adaptation from Universal and Hasbro, costing $5 million to produce and directed by Jon M. Chu, earned $1.3 million from 2,413 theaters, the worst showing ever since Warner Bros.’ August 2015 EDM release, We Are Your Friends.

Barry Levinson's Rock the Kasbah, starring Bill Murray, took in $1.5 million from 2,012 theaters, the lowest debut for a film starring Murray and for Open Road Films. Kasbah stars Murray as Richie Lanz, a rock manager past his prime who accompanies a performer (Zooey Deschanel) on a USO tour in war-ridden Afghanistan. When she bails, he comes across a young singer (Leem Lubany) who could be the biggest discovery of his career, and arranges for her to appear on Afghan Star, the equivalent of American Idol. Bruce Willis, Kate Hudson and Danny McBride also star in Rock the Kasbah.

At the international box office, Disney and Marvel are celebrating Ant-Man's late run in China, where the super hero movie took in another $22 million this weekend for a 10-day total of $81.9 million and global tally of $493.8 million.

Twentieth Century Fox’s Maze Runner: The Scorch Trials opened to $1.2 million this weekend in Japan, earning a total of $7.0 million from 31 total overseas territories. The film has grossed $190.3 million overseas and $268 million worldwide.

Disney and Pixar’s Inside Out posted an additional $4.4 million this weekend from 18 territories. The animated feature directed by Pete Docter earned just $15 million after 20 days of release in China. With no remaining territories to release, Inside Out has grossed $486.9 million overseas and $842.216 million worldwide.