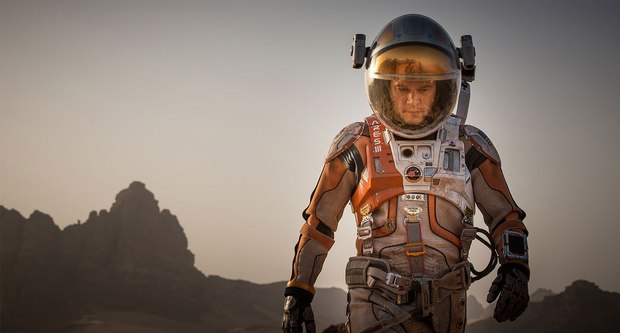 Ridley Scott's 3D space epic The Martian blasted off with a $55 million opening in North America, coming in ahead of expectations to reach the second-highest October opening of all time. The Martian, from 20th Century Fox, comes exactly two years after Alfonso Cuaron's Gravity, the current record holder, opened to a whopping $55.8 million. Last November, Christopher Nolan's Interstellar debuted just north of $47 million.

Overseas, The Martian also placed number one, blasting off with $45.2 million from 49 markets for a global debut of $100.2 million. It soared to $10.3 million in the U.K., the top showing ever for Scott and star Matt Damon, and is pacing well ahead of Gravity and Interstellar in numerous markets.

Sony's Hotel Transylvania 2 continued to impress with a second place take of $33 million. The Adam Sandler-led CG-animated film from Sony Pictures Animation held up nicely this weekend, down just 32 percent from last weekend's already stronger than expected launch. Overseas, Hotel Transylvania 2 landed in fifth place, taking in $20.4 million from 50 overseas markets for a new international total of $59.8 million and global tally of $150.3 million.

Nancy Meyers’ comedy The Intern, starring Anne Hathaway and Robert De Niro, came in fourth place for its sophomore weekend, taking in $11.6 million from 3,320 theaters for a new domestic total of $36.5 million. Overseas, Warner Bros. film made $15.7 million from 57 markets for a total of $35.6 million at the international box office and $72.1 million worldwide.

Twentieth Century Fox’s Maze Runner: The Scorch Trials rounded up the top five with $7.6 million from 3,319 theaters for a new domestic total of $63.2 million. Overseas, the sequel neared the $150 million mark, taking in $13.7 million from 58 markets for a total of $211 million worldwide.

Warner Bros.’ Black Mass, starring Johnny Depp, came in sixth place at the domestic box office, taking in $5.9 million from 2,768 theaters for a total of $52.5 million.

Baltasar Kormakur's Everest broke the top ten in its third weekend out, taking in $5.5 million from 3,009 theaters for a new North American total of $33.1 million and a seventh place finish. From Universal, Working Title, Cross Creek Pictures and Walden Media, the adventure movie swept up another $16.4 million from 65 overseas markets, lifting its total to $103.3 million at the international box office and $136.5 million worldwide.

M. Night Shyamalan’s The Visit came in eighth place over its fourth weekend out, taking in $3.9 million from 2,296 theaters for distributor Universal for a new domestic total of $57.6 million. Overseas, the horror title grossed $3.3 million from 30 territories, reaching a $19 million cume outside of North America for a worldwide gross of $76.7 million.

Faith-based title The War Room, released under Sony’s TriStar label, came in ninth place over its sixth weekend out. Directed by Alex Kendrick, The War Room made $2.8 million from 1,746 theaters for a new domestic total of $60.5 million.

Rounding out the list at number 10, Sony's The Perfect Guy made in $2.4 million over its fourth weekend in theaters from 1,364 locations for a new domestic total of $52.6 million.

Robert Zemeckis' The Walk, starring Joseph Gordon-Levitt as French artist Philippe Petit, who gained fame after he walked on a high wire between the Twin Towers of the World Trade Center in 1974, screened in 365 IMAX theaters ahead of its nationwide opening on October 9. The death-defying film from Sony/TriStar made $1.6 million to come in at number 11, putting its five-day debut at $2 million.

Elsewhere, Disney/Pixar’s Inside Out took $12.6 million from 25 total overseas markets, edging out Monsters University to become the fourth highest-grossing Pixar release overseas with a new international total of $438.4 million. Opening Tuesday in China, Inside Out has now made a total of $792.3 million globally, which makes it Pixar’s top earner behind only Finding Nemo.

Illumination Entertainment’s Minions continued its climb up the all-time charts this weekend, taking in $6 million from 44 territories. The animated hit now ranks as the 10th highest-grossing film and the second highest grossing animated film of all-time, both overseas with $811.4 million, and worldwide with $1.145 billion. With eight days left in China, Minions has now opened in all its international territories and is nearing the end of its run.