Still to open in China, Illumination Entertainment's ‘Minions’ becomes the third animated feature ever to cross the billion dollar mark. 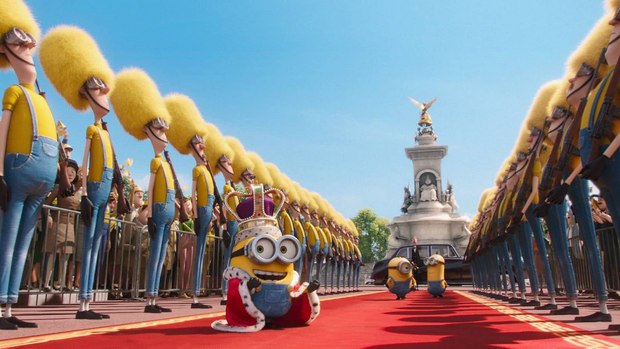 Universal's box-office topper Straight Outta Compton remained at number one for the third straight weekend in a row, taking in $13.2 million from 3,142 theaters for a new domestic total of $134.1 million. Overseas, the N.W.A. biopic earned an additional $6.5 million from eight markets for a new global tally of $140.9 million.

Sony’s Christian drama War Room came in second place, earning $11 million from 1,135 locations, the top debut for a faith-based title since Heaven Is for Real ($22.5 million) in April 2014. The low-budget $3 million feature, released by Sony’s faith-based TriStar/Affirm label, is the fifth collaboration from brothers Alex and Stephen Kendrick, the directing and producing team behind such Christian films as Fireproof and Courageous.

Paramount’s Mission: Impossible – Rogue Nation came in third place, taking in $8.3 million over the movie’s fifth week in theaters for a new domestic total of $140.1 million. Overseas Rogue Nation grossed $15.3 million from 64 overseas markets for a new total of $309 million internationally and $479.4 million worldwide. The film releases in China on September 8.

The Weinstein Company's new entry No Escape landed in fourth place for the weekend, taking in $8.29 million from 3,355 locations. The political action-thriller, directed by John Erick Dowdle, who co-wrote the screenplay with his brother, Drew Dowdle, stars Owen Wilson, Lake Bell and Pierce Brosnan. Made with a budget of $5 million, No Escape posted a five-day debut of $10.3 million after opening Wednesday.

Blumhouse Productions’ Sinister 2, distributed by Focus Films’ genre label Gramercy Pictures, came in fifth place with $4.7 million for the weekend. The micro-budgeted horror film has made a total of $18.5 million over its two weeks at the domestic box office.

Twentieth Century Fox's video game adaptation Hitman: Agent 47 brought in $3.9 million over its second weekend in theaters for a new domestic total of $15.2 million and a seventh place finish. Hitman: Agent 47 made $13.1 million from 60 overseas markets for an early international cume of $25 million, pushing the film’s worldwide total to $40.3 million.

In eighth place, Joel Edgerton's psychological thriller The Gift, distributed by STX Entertainment, took in $3.13 million over its fourth weekend in theaters for a new domestic total of $ $35.9 million.

Universal’s Jurassic World returned to IMAX locations this past weekend, taking ninth place at the domestic box office with $3.12 million for a new North American total of $643.1 million. Not accounting for inflation, the 3D blockbuster sequel remains the third highest grossing film of all-time domestically. Overseas, the dinosaur feature is inching closer to $1 billion, taking in $3.9 million from 35 territories for a new international total of $993.6 million for a staggering $1.637 billion worldwide.

Marvel’s Ant-Man rounded up the top ten, taking in $3.05 million over its seventh weekend out in theaters for a new domestic total of $169.2 million. Overseas the pint-sized action hero has brought in $199.8 million to date for a total of $368.9 million worldwide.

Elsewhere, Illumination Entertainment’s Minions continued its global dominance, becoming the third animated feature ever to cross the billion dollar mark. The Despicable Me spinoff distributed by Universal grossed $14.9 million from 60 overseas territories over the past weekend for a new international total of $694.1 million and $1.01891 billion worldwide. That number is on track to go nowhere but up with Minions set to debut in China on September 13.

Pixar’s Inside Out also continues to chug along overseas, posting $10.9 million from 35 territories this past weekend. The animated feature directed by Pete Docter has now made a total of $371.1 million at the international box office for a total of $715.625 million worldwide. A release date for China has not yet been confirmed.