Holdover films ‘Fifty Shades,’ ‘Kingsman: The Secret Service’ and ‘The SpongeBob Movie: Sponge Out of Water’ fend off a trio of new offerings at the domestic box office. 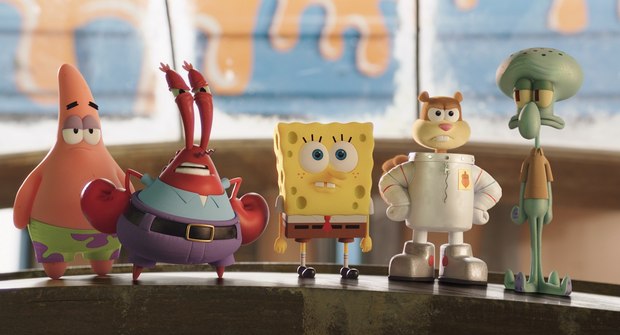 Despite a steep drop-off in audience attendance, Universal’s Fifty Shades of Grey remained at the top of the box office charts for the second week in a row, racing past the $400 million mark globally with $68.1 million for an international total of $280.5 million. Domestically, the $40 million EL James film adaptation directed by Sam Taylor-Johnson and starring Dakota Johnson and Jamie Dornan earned $23.2 million for a 10-day total of $130.1 million.

Matthew Vaughn's cheeky British spy film Kingsman: The Secret Service held onto the number two spot in its second weekend, taking in $17.5 million for a domestic total of $67.1 million. The 20th Century Fox film earned another $33 million overseas for a foreign total of $86.6 million and global tally of $153.7 million. Kingsman, which has been described as Kick-Ass-meets-007, is soaring in South Korea, where it has already earned $8.9 million to become the top-grossing R-rated foreign title of all time, surpassing all James Bond titles in only two weeks.

Paramount's The SpongeBob Movie: Sponge Out of Water, now in its third weekend, claimed the number three spot in North America with $15.5 million for a domestic total of $125.2 million. Overseas, the 2D/CG/live-action hybrid film took in another $21 million from 44 markets for a foreign total of $76 million and worldwide tally of $191.2 million.

From Paramount and MGM, Hot Tub Time Machine 2 came in seventh place for its debut, grossing $5.8 million and a C- CinemaScore. The male-fueled movie, opening nearly five years after the first film debuted to $14 million, cost $14 million to make. The sequel, directed by Steve Pink, returns most of the original cast, including Rob Corddry, Craig Robinson, Clark Duke and Chevy Chase, joined by newcomer Adam Scott. This time out, the crew inadvertently lands in the future.

Now in its third week at the box office, the Wachowski’s Jupiter Ascending came in eighth place with $3.6 million for a domestic total of $39.5 million. Overseas, big-budget sci-fi space opera, produced for $176 million, made $55.6 million for distributors Warner Bros. and Village Roadshow Pictures, pushing the film’s foreign tally to $75 million for a total of $114.5 worldwide.

The Weinstein Co.’s The Imitation Game came in ninth place, adding $2.5 million in its 13th week at the domestic box office for a total of $83.9 million. Starring Benedict Cumberbatch, the British drama has made a total of $76.9 million overseas for a grand total of $160.8 million worldwide.

Rounding out the list at number 10 is StudioCanal’s CG/live-action hybrid feature Paddington, which made $2.3 million over Oscar weekend for U.S. distributor The Weinstein Co. for a domestic total of $67.6 million. Overseas the family-friendly adventure has made a total of $154.2 million for a global tally of $221.9 million.

Meanwhile, Oscar winner Big Hero 6 has now earned $326 million overseas and $546 million worldwide. The animated Disney feature expands in to China on Saturday, where it will only need to make roughly $35 million to get past $600 million worldwide.