Tim Johnson’s ‘Home’ marks the best opening for a DWA film since ‘Madagascar 3: Europe's Most Wanted,’ in 2012, and the third-best showing ever for an original DWA title after ‘Kung Fu Panda’ and ‘Monsters vs. Aliens.’ 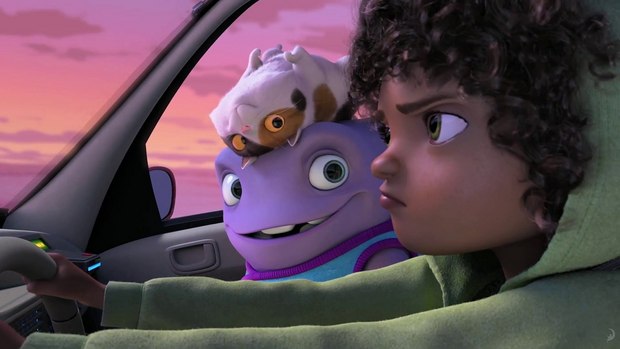 In a much-needed win for DreamWorks Animation, CG-animated family film Home easily topped the North American box office with a $54 million debut from 3,708 theaters. Overseas, Home, directed by Tim Johnson under a budget of $135 million, has earned $48.2 million for an early worldwide total of $102.2 million, including $24 million for the weekend.

Heading into the weekend, Home was expected to earn in the mid-$30 million range, but the film, about a teenager on the run (Rihanna) who teams up with a misfit alien (Jim Parsons), vastly exceeded expectations for DWA and distribution partner Fox.

With a voice cast that also includes Jennifer Lopez and Steve Martin, the 3D title marks the best opening for a DWA film since Madagascar 3: Europe's Most Wanted ($60.3 million) in summer 2012, and the third-best showing ever for an original DWA title after Kung Fu Panda ($60.2 million) and Monsters vs. Aliens ($59.3 million), not accounting for inflation.

Warner Bros.' R-rated comedy Get Hard came in number two with a $34.6 million debut from 3,175 locations, marking the largest R-rated opening ever for stars Will Ferrell and Kevin Hart. Get Hard, costing $40 million to make, marks the feature directorial debut of Etan Cohen. Alison Brie, Edwina Findley and Craig T. Nelson also star. Internationally, Get Hard grossed $4.6 million from its first nine markets, including $2 million in the U.K.

Among holdovers, Lionsgate's Insurgent fell to number three, taking in $22 million in its second weekend for a domestic total of $86.4 million. Internationally, Insurgent grossed $29.9 million for the weekend from 81 markets for a foreign total of $93.7 million and global tally of $180.1 million.

In its third weekend out, Disney’s live action remake of Cinderella made $17.5 million, jumping the $150 million mark in North America and $300 million worldwide. Cinderella topped the box office chart overseas, taking in an additional $38.7 million for the weekend. In China, Cinderella has earned $65 million to date for an international total of $186.2 million and global haul of $336.2 million.

The weekend's other new nationwide entry, indie horror film It Follows, directed by David Robert Mitchell, earned $4 million from only 1,218 locations to place number five. The critically acclaimed movie, marking the widest release ever from Radius-Dimension Films, has now grossed $4.8 million domestically, and is expected to expand next week.

20th Century Fox’s Kingsman: The Secret Service came in sixth place, taking in an additional $3.1 million for a domestic total of $119.4 million. Overseas Kingsman grossed another $25.4 million, pushing the film’s total to $208.3 million. Most of that came from China, where it opened to a strong $20.2 million.

In its third weekend at the box office, Warner Bros.’ Run All Night added an additional $2.2 million to its domestic take for a total of $23.8 million and a seventh place finish.

Fox Searchlight’s The Second Best Exotic Marigold Hotel came in eighth place, taking in $2.2 million for a domestic total of $28.1 million. Overseas the specialty box office film has made $38.8 million for a total of $66.9 million globally.

Faith-based drama Do You Believe? came in ninth place over its sophomore weekend, taking in $2.2 million for producer Pure Flix Entertainment for a total of $7.1 million.

Rounding out the list at number 10 is director Pierre Morel’s The Gunman, which brought in $2 million for distributor Open Road Films. Starring Sean Penn, Javier Bardem, Idris Elba and Ray Winstone, the film has now made a total of $8.8 million.