Young-adult adaptation Divergent rules the box office this weekend with a $56 million debut. 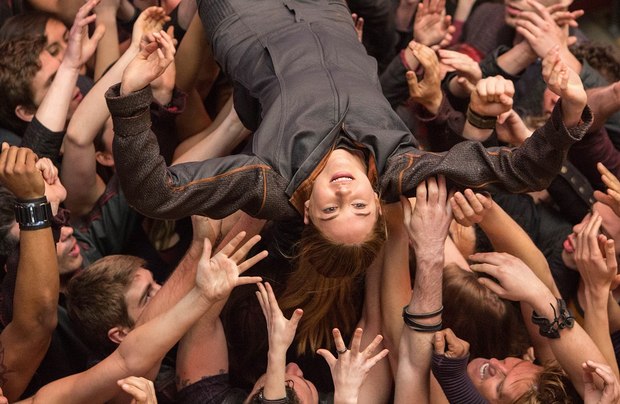 Summit Entertainment's YA adaptation Divergent topped the North American box office with a $56 million debut, launching a new franchise for Summit and parent company Lionsgate. The dystopian sci-fi adventure, starring Shailene Woodley, is directed by Neil Burger and based on the best-selling book series by Veronica Roth about a young woman who poses a threat to society after failing to fit into one of five strictly controlled factions. The film, which cost $85 million to make, doesn't begin rolling out overseas in earnest until April 4.

Among the weekend’s other new offerings, Disney's Muppets Most Wanted came in second place with a $16.5 million debut. The sequel, budgeted at $54 million, is expected to make up ground overseas, where the film opened to $1.5 million from its first eight markets. Directed by James Bobin, Muppets Most Wanted features Ricky Gervais, Ty Burrell and Tina Fey as the live-action leads.

In third place, DreamWorks Animation’s Mr. Peabody & Sherman took in $11.7 million in its third weekend out for a domestic total of $81 million. Internationally, the 3D animated movie crossed the $100 million mark, grossing $11.4 million for the weekend from 64 markets for a foreign total of $102.8 million and global total of $183.8 million.

300: Rise of An Empire remained in the top five in its third weekend, placing fourth with $8.7 million for a domestic total of $93.8 million. Overseas, the Warner Bros. and Legendary Pictures title took in another $21 million from 63 markets for a foreign total of $195.4 million and worldwide total of $289.2 million.

Also opening nationwide was Christian drama God's Not Dead. From Pure Flix Entertainment, the movie came in fifth place with $8.6 million from 780 locations. Based on the book of the same name by Rice Broocks, and Daniel Bashta's song "Like a Lion,” God's Not Dead stars Shane Harper as a college student whose philosophy professor forces him to sign a declaration that "God is dead." When the student refuses, he's ordered to prove his position that God exists in a series of debates. Directed by Harold Cronk, the indie movie also stars Kevin Sorbo, Jim Gleason, David A.R. White and Dean Cain.

DreamWorks Pictures and Disney's new Aaron Paul racing movie Need for Speed earned $7.8 million in its second weekend for a sixth place finish and a domestic total of $30.4 million. Overseas, the action film won the weekend at the international box office, grossing $29.2 million from 55 markets for a foreign total of $93.8 million. Worldwide, the movie has earned $126.5 million.

Coming in seventh place in North America was Wes Anderson's box-office hit The Grand Budapest Hotel, which expanded into a total of 304 locations in its third outing. The film grossed a stellar $6.8 million, and once again nabbed the top location average of the weekend with $22,204. Grand Budapest, which will expand into additional markets next weekend, has earned a total of $13.2 million for Fox Searchlight. Grand Budapest is also prospering overseas, where it took in $9.6 million from 24 markets for an international total of $33 million and worldwide total of $46.3 million.

In its fourth week at the box office, Universal’s Liam Neeson thriller Non-Stop came in eighth place, bringing in $6.3 million for a domestic total of $78.6 million.

Warner Bros. and Village Roadshow’s The Lego Movie grossed $4.1 million to come in ninth place, ending Sunday with a domestic total of $243.4 million.

Rounding out the list at number 10, Lionsgate's Tyler Perry's The Single Moms Club made $3.1 million over its sophomore weekend for a total of $12.9 million.

Disney’s Frozen held first place in Japan with $8 million ($28.9 million total). Sometime this weekend, Frozen passed Pirates of the Caribbean: On Stranger Tides to move in to 12th place on the all-time worldwide chart. The movie has now earned $1.05 billion total, and is poised to pass Pixar’s Toy Story 3 ($1.063 billion) in the next week or so.