Well on its way to becoming the first title of 2016 to cross $1 billion, Marvel’s newest super hero blockbuster directed by Anthony and Joe Russo opens to $181.8 million in the U.S. for a total of $678.4 million at the global box office. 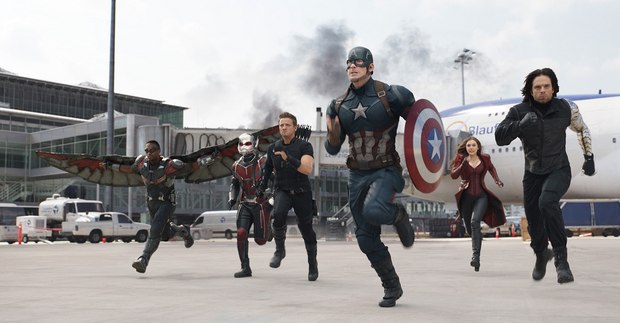 Continuing Disney’s dominance at the box office, Marvel’s Captain America: Civil War launched to a massive $181.8 million in North America over the weekend, scoring the fifth-best opening of all time, according to pro.boxoffice.com, as well as the top launch of 2016 to date.

Overseas, where the super hero tentpole movie directed by Anthony and Joe Russo debuted last weekend, Civil War brought in another $220 million -- including $96 million in China -- for an international total of $496.6 million. With a worldwide take of $678 million after just 12 days in release, Civil War is a sure bet to become the first release of 2016 to top the $1 billion mark at the worldwide box office.

The Jungle Book remained a formidable force in its fourth weekend out, coming in second place at the North American box office with $21.9 million for a domestic total of $285 million. Overseas, the photoreal adventure grossed another $24.1 million mark, finishing Sunday with a foreign tally of $491.2 million. Worldwide, The Jungle Book has made a total of $776.2 million.

Universal's The Huntsman: Winter's War followed in fourth place, taking in $3.6 million in its third weekend for a domestic total of $40.4 million. The fairytale sequel did better overseas, taking in $105.9 million for a global total of $146.3 million.

CG-animated feature Zootopia, now in its tenth week in theaters, brought in an additional $2.7 million this past weekend for a new domestic total of $327.6 million. The WDAS feature also crossed the $950 million mark worldwide, becoming the sixth-biggest animated feature of all time, and is predicted to end its run as the second-biggest original release ever behind The Lion King ($987 million, including reissues) and Avatar ($2.8 billion).

Rainmaker Entertainment’s Ratchet & Clank, meanwhile, made $1.5 million over its sophomore weekend for a ninth place finish and a new domestic total of $7.1 million. Overseas, the movie based on the hit Sony PlayStation game racked up an additional $2 million for an early global total of $9.1 million. Directed by Kevin Munroe and Jericca Cleland, the feature was produced for $10 million.

Rounding out the list at number 10, Zack Snyder’s Batman v. Superman: Dawn of Justice -- now in its seventh week in theaters -- brought in $1.05 million for distributor Warner Bros. for a total of $327.3 million domestically. Overseas, the DC super hero film has made $540.6 million for a total of $867.8 million worldwide.