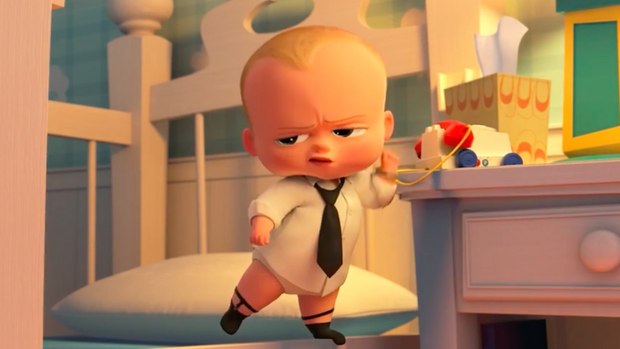 DreamWorks Animation’s The Boss Baby continued to dominate the box office in its second weekend in theaters, coming in first place domestically for the second week in a row with $26.4 million for a new total of $89.4 million. Boss Baby also continued to be a hit overseas, where the CG-animated feature released by distribution partner Fox brought in $37.5 million from 46 markets for a foreign total of $110.4 million and new worldwide tally just under $200 million.

Disney’s live-action adaptation of Beauty and the Beast held firm in second place in its fourth week out, taking in $23.7 million from 3,969 theaters for a total of $430.9 million at the domestic box office. Overseas, the Bill Condon-directed movie may have been toppled from its perch at the top of the global box office but it is still nearing the $1 billion mark; Beauty and the Beast has now made a total of $545.1 million in foreign grosses for a new worldwide total of $977.4 million.

That left Sony’s new Smurfs: The Lost Village with a third place debut, bringing in $13.2 million from 3,610 theaters. Produced for a relatively modest $60 million, this third installment in the Smurfs franchise brought in another $22 million from 58 overseas markets for a total of $42.1 million internationally and $56.1 million globally.

Directed by Kelly Asbury (Gnomeo & Juliet), Smurfs: The Lost Village centers on a mysterious map that sets Smurfette (Demi Lovato) and her friends Brainy, Clumsy and Hefty on a race through the Forbidden Forest, leading to the discovery of the biggest secret in Smurf history. The voice cast also includes Rainn Wilson, Joe Manganiello and Jack McBrayer.

Paramount’s Ghost in the Shell, based on the popular Japanese manga series and starring Scarlett Johansson, came in fifth place domestically, earning $7.3 million over its first 10 days in theaters for a total of $31.6 million. Produced for $110 million, the sci-fi action movie is doing better overseas, where it topped the foreign box office chart with $41.1 million from 54 markets following its $21.4 million opening in China. That pushes the movie's international total to $92.5 million for a worldwide tally of $124.1 million

Now in its third week in theaters, Lionsgate’s Power Rangers landed in sixth place, taking in $6.2 million from 2,978 locations for a new domestic total of $75.1 million.

Warner Bros. and Legendary Pictures’ Kong: Skull Island delivered $5.6 million over its fifth weekend out for a new domestic total of $156.3 million. Overseas, Kong brought in an additional $16 million for a total of $377.8 million internationally, pushing the film’s global haul to $534.4 million.

Twentieth Century Fox’s Logan, now in its sixth week in theaters, finished in ninth place with $4 million for a new domestic total of $218 million. Overseas, the latest installment in the X-Men franchise collected $2.7 million from 47 markets for an new total of $378.5 million internationally and $382.5 million globally.

Elsewhere on the box office chart, Japanese director Makato Shinkai’s animated feature Your Name made a $1.6 million debut this past weekend at the domestic box office, playing in 288 theaters for an average of $5,821 per location. That’s in addition to the body-switching anime film’s international gross, which has now reached $328.7 million for a total of $330.3 million worldwide.

Sci-fi feature Colossal, starring Anne Hathaway as a woman who battles a Godzilla-like creature in South Korea, also opened in four theaters in New York and Los Angeles this past weekend, grossing $125,809 for a screen average of $31,452. The independent film marks the first release from Neon, the distribution company launched by former Radius-TWC co-chief Tomas Quinn and Alamo Drafthouse founder Tim League, and was produced for 15 million.