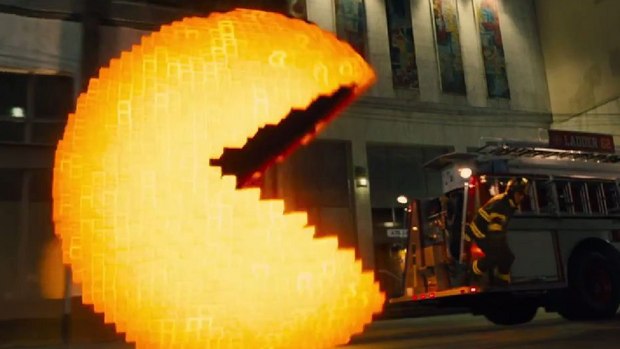 Sony’s ‘Pixels’ bows in second place, taking in $24 million from 3,723 theaters at the domestic box office.

Two weeks after its release, Marvel’s Ant-Man narrowly beat out Sony’s new action-comedy Pixels at the North American box office, taking in $24.8 million from 3,868 theaters for a 10-day domestic cume of $106.1 million and a first place finish. Overseas, Ant-Man expanded into 11 additional international markets, making $35.4 million from 49 total territories for a new international total of $120.4 million and global tally of $226.5 million.

Sony’s Pixels debuted to $24 million from 3,723 theaters at the domestic box office, well under half of the film’s $88 million production budget after rebates. Overseas, the Adam Sandler-starring sci-fi comedy feature brought in $25.5 million from 56 markets for a global total of $50.4 million. Directed by Chris Columbus, Pixels stars Sandler, Kevin James, Peter Dinklage and Josh Gad as a group of friends battling aliens who have used video games from the 1980s to attack Earth. Guaranteeing a run in China, Pixels was co-financed by LStar Capital and China Film Group.

Universal and Illumination Entertainment's Minions placed number three with $22.1 million for a domestic total of $261.6 million. Internationally, the Despicable Me spinoff pulled in $44 million from 60 markets for a foreign cume of $497.8 million and global tally of $759.4 million.

The R-rated Trainwreck, starring Amy Schumer and directed by Judd Apatow, came in fourth place at the North American box office with 17.3 million from 3,171 theaters for a 10-day domestic total of $61.5 million for Universal.

Antoine Fuqua's adult-skewing boxing drama, Southpaw, starring Jake Gyllenhaal, debuted in fifth place, earning $16.5 million from 2,772 theaters for The Weinstein Co. title. The film stars Gyllenhaal as a boxer who finds success with the gloves on, but is having major issues in his personal life. Rachel McAdams, Rita Ora, Forest Whitaker, Naomie Harris and 50 Cent co-star. The script was written by Sons of Anarchy creator Kurt Sutter. Southpaw cost $25 million to produce after rebates.

<iframe width="620" height="349" src="https://www.youtube.com/embed/rFGiHm5WMLk" frameborder="0" allowfullscreen></iframe> Pixar Animation Studio’s Inside Out came in at number seven, taking in $7.3 million at the domestic bnox office for a new North American total of $320.3 million. The Pete Docter-directed feature posted $28.3 million in its sixth weekend of release from 51 overseas territories. It has now earned $229.8 million overseas and $550.1 million worldwide with 28 percent of its international marketplace still to open. Inside Out had the widest release in history in the U.K./Ireland, opening in 608 locations and grossing $10.9 million for the top spot in the market ahead of Monsters University and Brave. In South Korea Inside Out is now the second biggest Disney release ever behind Frozen.

Now in its seventh week at the box office, Universal’s Jurassic World landed in eighth place, taking in $6.8 million for a new domestic total of $623.7 million and overtaking The Avengers to become the third top-grossing film of all time. Overseas Jurassic World took in $7.6 million from 63 territories this weekend, continuing its global record-breaking run with a total of $917.7 million overseas and $1.542 billion worldwide. Jurassic World now sits at number three all-time worldwide behind Titanic and Avatar.

Rounding out the list at number 10 is Paramount and Skydance's Terminator: Genisys, which made an additional $2.4 million over its fourth week at the box office for a new domestic total of $85.6 million. Overseas, the franchise reboot earned $10.7 million from 64 overseas territories, lifting its international total to $219.4 million and its global haul to $305.0 million.