Sixth film in action-thriller series opens with $61.5 million domestic take, while ‘Hotel Transylvania 3’ and newcomer ‘Teen Titans Go! To the Movies’ land in the top five. 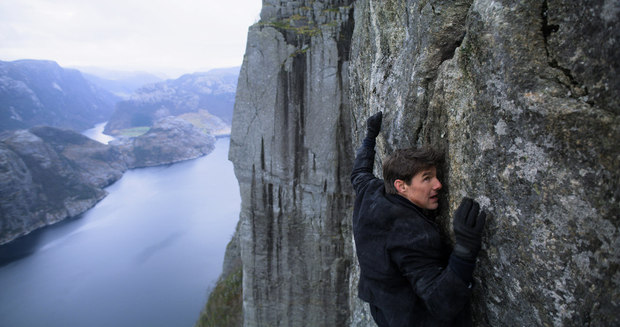 Showing that audiences still love to see Tom Cruise / Ethan Hunt get smacked around a movie screen, Mission: Impossible – Fallout opened in theatres this weekend with a franchise-best $61.5 million domestic box office haul. The sixth film in the action-adventure series, Fallout once again pairs Cruise with Christopher McQuarrie, who also directed 2015’s Mission: Impossible – Rogue Nation. According to the film’s distributor, Paramount, Fallout is tracking almost 20% ahead of Rogue Nation, and with a similar overall run, would top $215 million domestically.

As the last big summer blockbuster of 2018, along with favorable reviews from fans and critics, Fallout is expected to continue generating strong numbers over the coming weeks.

Debuting with a less than expected $10.5 million was the Warner Bros. DC-inspired animated feature, Teen Titans Go! To the Movies. The film, based on the animated TV series, Teen Titans Go!, faced stiff competition from Summer Vacation as well as Incredibles 2, which continued its historic box office run with another $7.1 million take for a $572 million domestic / $996 million worldwide cume. Teen Titans Go! To the Movies, however, with a reported budget of only $10 million, has yet to open in the bulk of its larger global markets, which should pad its overall take considerably.

In sixth place was Marvel’s Ant-Man and the Wasp, with $8.4 million, bringing its cume to $183 million domestic / $394 million worldwide.

Two big Universal releases remained in the top ten. Jurassic World: Fallen Kingdom continued its impressive run, with another $6.8 million, bringing its 38-day domestic total to $397 million, with a tremendous worldwide take of $1.24 billion. The Dwayne Johnson action-thriller, Skyscraper, slipped to number nine with a meager $5.4 million, for a $59 million domestic total after only 17 days of release. It has fared better with audiences internationally, who have boosted its worldwide cume to $226 million.