Box Office: 'The Hobbit: The Desolation of Smaug' Wins Weekend

Peter Jackson's The Hobbit: The Desolation of Smaug debuts at the top of the box office charts this weekend, with Disney's Frozen coming in second place. 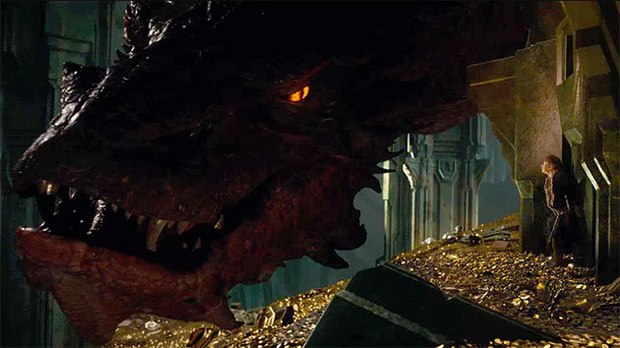 Peter Jackson's The Hobbit: The Desolation of Smaug debuted at the top of the box office charts this weekend, taking in $73.7 million for its domestic debut. Internationally, the film ranked number one across 49 foreign markets, earning $131.2 million for a worldwide total of $205 million.

Produced by New Line Cinema, MGM and Warner Bros., The Desolation of Smaug had the fourth-biggest December opening ever, behind An Unexpected Journey ($84.6 million), I Am Legend ($77.2 million) and Avatar ($77 million). Based on J.R.R. Tolkien's 1937 fantasy novel, the adventure film follows hobbit Bilbo Baggins (Martin Freeman) as he travels with a group of dwarfs to face off against the dragon Smaug (voiced by Benedict Cumberbatch). Evangeline Lilly, Orlando Bloom, Lee Pace and Luke Evans co-star.

Coming in second place is Disney’s animated feature Frozen, which brought in $22.2 million on its third weekend at the box office for a domestic total of $164.4 million. Overseas, Frozen added $31.5 million for a worldwide total of $266 million.

The Hunger Games: Catching Fire, now in its fourth week, grossed $13.15 million for the number four spot and a North American total of $357 million. Internationally, the hit sequel grossed $19.5 million, bringing the overseas total to $372.9 million. The film’s worldwide total is now at $739.9 million, surpassing the lifetime worldwide box office for the first film, The Hunger Games ($691 million).

Marvel’s Thor: The Dark World came in fifth place over its sixth week at the North American box office. Starring Chris Hemsworth, the action feature made $2.7 million for a domestic total of $198.1 million. Worldwide the film has made $619.9 million to date.

Disney's Saving Mr. Banks also opened in limited release this weekend, bringing in $421,000 from 16 venues. The biopic expands into wide release next week.