Bosnia’s Berin Tuzlic Unveils New Animated Short, ‘I run away even if I am not guilty’

With likeable characters and their stories, celebrated Bosnian animator and cartoonist draws on some of the basic questions of today. 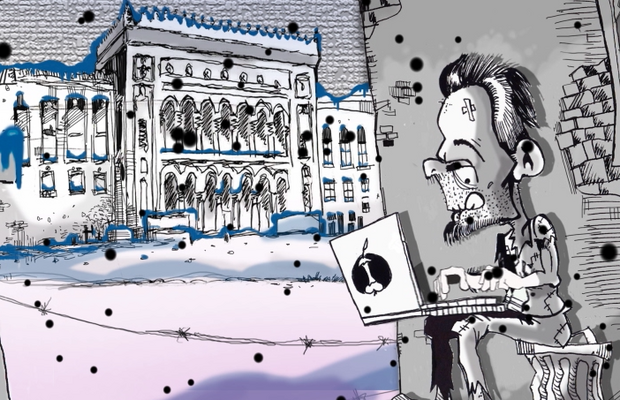 Celebrated Bosnian animator and cartoonist Berin Tuzlić has made a new animated movie, I run away even if I am not guilty. This new piece is marked, yet again, in his familiar tone with a symbolic title.

Seemingly a simple short film, I run away even if I am not guilty draws on some of the basic questions of today. Likeable characters with their stories, symbolic places and signs -- with a touch of irony and American stars -- are all part of this story that has no end, because if we cannot understand each other, how can we understand the world around us?

“The film I'm running away and when I am not guilty [is] inspired by the current global situation,” says Tuzlić. “It talks about the status of an ordinary man in a global guardianship and all his attempts to establish normal communication in order to be free and have fun with his friends, old and new ones. In this society communication became too much sensitive.”

Tuzlic’s work has been shown at more than 20 international film festivals around the world, including in France, Japan, New York, Hiroshima, Isfahan and China. He is the president of the ASIFA BiH -- the Bosnian branch of the International Association of Animated Films -- and also founder of the PIXEL Association for Art & Visual Communication. In Bosnia and Herzegovina his last comic book, “Scarecrows,” was released by PIXEL Sarajevo and by Komic Brew for the U.K. market.

Tuzlić directed the film and designed all the characters, with animation completed by Halvadžija Adnan, Adnan Mahinić, Berin Tuzlić and Amila Sabic, and sound and music by Haris Ljumanović. The movie was produced by Via Media. Tags
Short Films
animated shorts
Berin Tuzlić
Bosnia
I run away even if I am not guilty
More From News:
Next Post
‘Spooky Kitarō’ Creator Shigeru Mizuki Dies at 93Previous Post
74 Original Songs Compete for 2015 Oscar