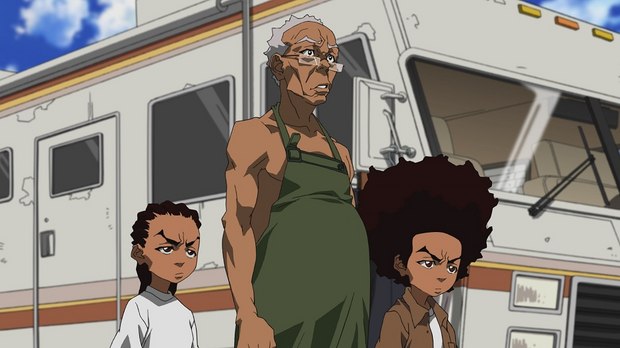 The newest addition to Adult Swim’s top-rated Monday night prime time line-up of off-network (Family Guy, American Dad) and original comedies (Rick and Morty), The Boondocks also ranked as the #1 telecast of the day on all broadcast and cable television networks among adults 18-34 & 18-24, out-performing basic cable competition by significant triple digits, ranging between 113% and 760%. Compared to the same time period last year, The Boondocks earned across-the-board ratings and delivery growth ranging between 75% and 96%, as well as significant ratings/delivery gains over the previous four weeks’ average, ranging between 64% and 149%. Overall, The Boondocks attracted nearly three million viewers 2+, representing a 58% increase vs. last year’s time period.

Highlights of Adult Swim’s The Boondocks’ Season 4 premiere, including targeted demo delivery and ratings compared to the same 2013 time period, include the following:

In the award-winning animated series The Boondocks, Robert “Granddad” Freeman is the legal guardian of his rambunctious grandkids and has moved them from the south side of Chicago to the quiet and safety of “The Boondocks” (in this case, suburban Woodcrest), hoping that he can ignore them altogether and enjoy the golden years of his life in peace. The series is produced by Sony Pictures Television and features the voice talent of Regina King (Southland), John Witherspoon (Friday After Next), Anthony Williams (Boston Legal), Gabby Soleil (Johnson Family Vacation), Jill Talley (Camp Lazlo), and Cedric Yarbrough (Reno 911!). The Boondocks airs on Mondays at 10:30 p.m. ET/PT on Adult Swim.