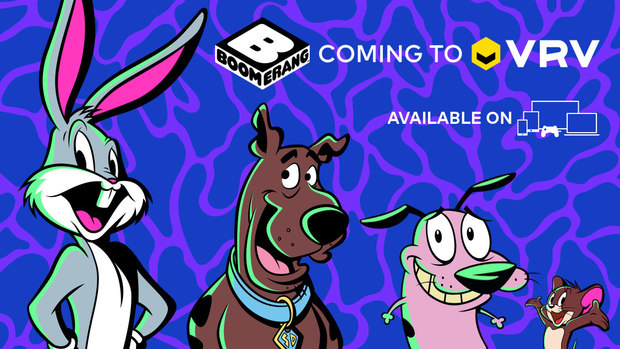 VRV, the fandom focused video platform from Ellation, and Boomerang, the premium subscription streaming service, have announced today that Boomerang will join VRV as the platform’s newest channel partner.

The Boomerang channel will be available on Tuesday, November 13 and will feature a robust library of classic cartoons from the Hanna Barbera, Looney Tunes and MGM libraries including Scooby Doo, Tom & Jerry, Bugs Bunny, The Jetsons, The Flintstones and more, all alongside new originals including Dorothy and The Wizard of Oz, Wacky Races, Bunnicula, Cloudy with a Chance of Meatballs and others. Additionally, Boomerang recently announced Monchhichi and Care Bears will be coming to the service in 2019.

Boomerang is available to VRV subscribers in time for the newly digitally remastered Garfield and Friends animated series and the Thanksgiving Boom Movie Feast featuring Garfield, Jonny Quest, Yogi Bear and The Flintstones.

Eric Berman, head of content partnerships, VRV, commented, “By adding Boomerang to the VRV bundle, we will connect this incredible library of classic animation with a whole new audience on VRV. Our community is comprised of millennials who are young at heart and will appreciate these series as the foundation for the animation they know and love today. From our experience, the success of any SVOD service is predicated upon the continued addition of new content to complement meaningful IP, and Boomerang continues to do an excellent job of delivering new premium series on the channel. We are so glad to be partnering with another WarnerMedia property and are delighted that Boomerang’s dedication will now benefit the VRV community.”

VRV is a fandom-focused video platform that bundles premium SVOD channels including Crunchyroll, NickSplat, HIDIVE, Rooster Teeth, Shudder and more alongside exclusive series such as Bravest Warriors, Bee and PuppyCat and Gary and His Demons.

Boomerang, originally launched by Turner in 2000 as a television network, partnered with Warner Bros. in 2017 to expand with a new, standalone domestic premium video subscription service.  Boomerang provides instant access to 27 complete series as well as more than 3200 titles, providing fans with the largest animation offering of any subscription streaming service.