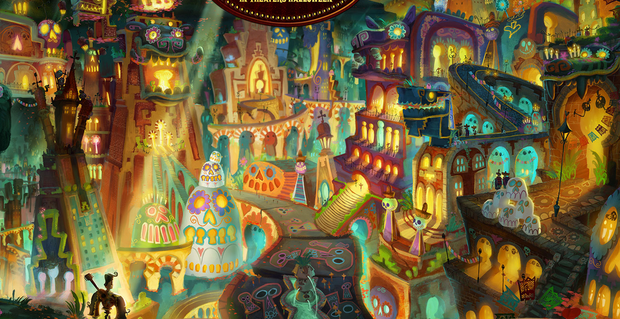 The American Film Institute has announced that it will be presenting a special screening of Fox Animation’s The Book of Life at the 2014 AFI Latin American Film Festival on Sunday, October 5 at 3:00 p.m. Free and open to the public, the screening will include a Q&A with director and writer Jorge R. Gutierrez.

Inspired by the Mexican Day of the Dead celebration, The Book of Life is produced by Guillermo del Toro and directed by Jorge R. Gutierrez (El Tigre: The Adventures of Manny Rivera). The film follows Manolo (voiced by Diego Luna), a young man who is torn between pleasing his family and competing for the heart of the beautiful Maria (Zoe Saldana) against charming Joaquin (Channing Tatum). Before choosing, he embarks on an incredible adventure that spans three fantastical worlds where he must face his greatest fears.

Read the full press release, below:

Silver Spring, MD, September 4, 2014 — The American Film Institute announced today the complete slate of films for the 2014 edition of its AFI Latin American Film Festival which will take place September 18–October 8 at the historic AFI Silver Theatre in Silver Spring, Maryland. The festival, now celebrating its 25th year, showcases the best in filmmaking from Latin America and, with the inclusion of films from Spain and Portugal, celebrates Ibero-American cultural connections. This year's selection of 40 films ranges from international festival favorites and award winners, to local box-office hits and debut works from gifted new talents. Additionally, a number of the filmmakers and actors will present their films in person at this year's screenings and several of the festival's Special Presentations will include post-screening receptions.

The Opening Night film, THE LIBERATOR, directed by Alberto Arvelo (CYRANO FERNÁNDEZ) is an epic big-screen biopic about the South American freedom fighter Simón Bolívar. The screening will be followed by a reception sponsored by Café Azul.

Additional Special Festival Presentations include: Argentina's box office sensation 7TH FLOOR, a heart-pounding thriller starring Ricardo Darín (THE SECRET IN THEIR EYES) and Belén Rueda (THE ORPHANAGE); a free sneak preview of the animated adventure THE BOOK OF LIFE, produced by Guillermo del Toro (PACIFIC RIM), with director and writer Jorge Gutierrez in attendance for a post-screening discussion; and PARADISE, a light-hearted rom-com about weight loss, with director/screenwriter Mariana Chenillo (NORA'S WILL) in attendance for a discussion, plus a post-screening reception sponsored by the Mexican Cultural Institute.

The 2014 festival also features the World Premiere of the first Salvadoran dramatic feature in more than 40 years, THE CROW'S NEST, with producer/director/screenwriter Arturo Menéndez and producer Andre Guttfreund in attendance for a discussion, plus a post-screening reception sponsored by the Embassy of El Salvador; the US premiere of recent Cannes debut, GENTE DE BIEN, a sensitive coming-of-age story; and TO KILL A MAN, winner of the Grand Jury Prize in the World Cinema Competition at the 2014 Sundance Film Festival, with lead actor Daniel Candia in attendance, to be followed by a Chilean wine tasting sponsored by the Embassy of Chile.

Other festival highlights include LOCK CHARMER, a charming dramedy with a dash of magical realism, with director/screenwriter Natalia Smirnoff (ROMPECABEZAS) in attendance for a discussion with Dr. Beatriz Urraca, co-editor of “Directory of World Cinema: Argentina,” plus a post-screening reception sponsored by the Embassy of Argentina; and Closing Night selection, 10,000 KM, about a long-distance relationship in the 21st century, with director/screenwriter Carlos Marques-Marcet (THE YELLOW RIBBON) in attendance for a discussion, plus a post-screening reception sponsored by SPAIN arts & culture and the Embassy of Spain.

Additional festival guests include filmmaker Héctor Valdez and actor Christian Alvarez with their breathtaking Dominican road film, SOUTH OF INNOCENCE and director/screenwriter Cláudio Marques with his anarchic political allegory from Brazil, AFTER THE RAIN.

Further highlights include Argentina's LIVING STARS, a raucous dance documentary, which will be followed by an after-party featuring a DJ set by Maracuyeah Collective; CASA GRANDE, a witty coming-of-age tale from Brazil that explores issues of race and class; TWO SHOTS FIRED, an existential comedy from Martín Rejtman (THE MAGIC GLOVES), following its recent screenings at the Toronto and New York Film Festivals; ILLITERATE, starring Paulina García (GLORIA); THE BOY AND THE WORLD, a stunningly animated Brazilian fable, awarded the top prize at this year's Annecy Animated Film Festival; and LIVING IS EASY WITH EYES CLOSED, winner of six Goya Awards.

For updated information and tickets, go to AFI.com/Silver/LAFF.