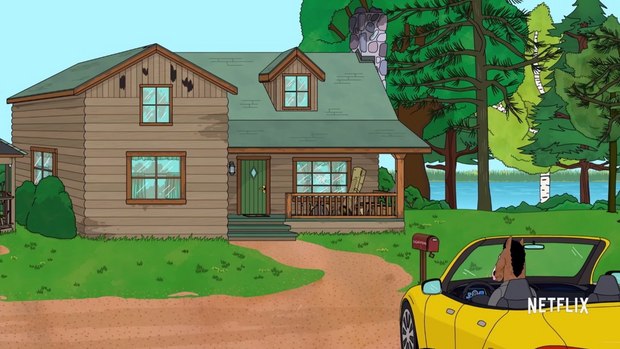 Season 4 of ‘BoJack Horseman’ arrives on Netflix on September 8, 2017.

With the new season of Netflix’s BoJack Horseman launching this Friday, LAist has a swell interview with Los Angeles-based illustrator and graphic designer Lisa Hanawalt, the creator of the visuals for the hit animated series.

About a Hollywood has-been who happens to also be a talking horse, BoJack Horseman initially received a lukewarm reception upon its release in 2014, but gradually gained traction with audiences, becoming a beloved critic’s favorite as well as a fixture on top-10 lists.

Earlier this year, the Writers Guild of America recognized BoJack Horseman writer Joe Lawson with an award for outstanding achievement in writing for television for the season three episode, “Stop the Presses,” which featured the voice of guest star Candice Bergen. The series also won the award for Special Distinction for a TV Series for the episode “Fish Out Of Water” at the Annecy festival, in June. More recently, Kristen Schaal picked up an Emmy nomination for outstanding character voice-over performance for her role as Sarah Lynn in the episode “That’s Too Much, Man!”

Hanawalt is directly responsible for the show’s distinctive visual style and the designs for all the characters, including the titular BoJack, who is voiced by Will Arnett. And as it turns out, she really, really, really loves horses. In the interview, Hanawalt talks about how she got her start, and some of her earliest inspirations, as well as her boundless affection for sight gags and horses. Here’s a quick rundown:

“It’s so hard to think of just one, but just because it’s my own sense of humor, I really like whenever there’s a particularly stupid background poster. In Season 2, Episode 7, they go to ‘Manatee Fair,’ a women’s magazine in New York, and there are all these really dumb posters in the background that are like, “Oh my God! Belts!” I just like making fun of fashion-y stuff, the kind of stuff I’ve been exposed to my whole life, and make it look fun and stupid. I like wordplay.”

Hanawalt thinks there should be a War Horse sequel:

“I love War Horse. The other day, I was joking that I would really like a sequel called Son of War Horse, and my boyfriend was like, ‘It should be called More Horse.’ I’m jealous because we keep seeing these Planet of the Apes movies come out, and they’re my boyfriend’s favorite movies, and I hate them, but I go to see them with him because I’m nice. I just want there to be an equal franchise that’s only horses.”

Hanawalt is sensitive to emotions:

“I want my drawings to be warm and to pull people in, but I respond to the heaviness of the script. Certain episodes are going to need a beautiful skyscape that communicates sadness and wistfulness, so it’s a balance between what’s more serious and what’s really silly. There are definitely scenes that are like, ‘Okay, BoJack is crying, we can’t have an ass in the background, in a painting.’”

Hanawalt used to be in an all-women cartooning studio called Pizza Island:

“Oh God, I have so many. A lot of my friends and peers are artists, and I was in an all-woman cartooning studio back in New York called Pizza Island, that had so many talented women in it. I got into alt-art comics in high school, and I was really into Renee French and Phoebe Glockner. The two of them, when I read their work, I was like, here’s all this super-perverted, gross stuff, these biographical comics, written by women! That really blew my mind.”

BoJack Horseman season 4 arrives on Netflix on September 8, 2017. Check out the season 4 trailer below, and head over to LAist to read the full interview.