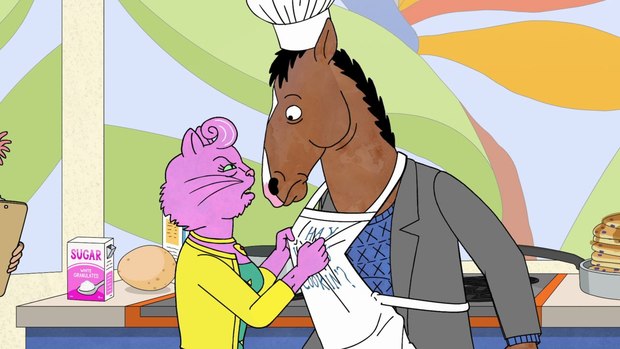 The Animation Guild has just announced that after months of negotiations, the crew of the Emmy Award-nominated and critically acclaimed Netflix animated series, BoJack Horseman, has overwhelmingly voted today to be represented by the Animation Guild and covered under a union contract with their employer. The gains include establishing wage minimums and securing employer-paid health and retirement benefits.

Amy Winfrey, a director on the show, tells AWN, "The crew at ShadowMachine [the show's animation production studio] is really excited today. This vote means we're now covered by the union, which provides wage minimums and a health and pension plan."

“This contract would not have been possible without the hard work and dedication of the BoJack Horseman negotiations committee,” TAG business representative Jason MacLeod said. “This crew was organized, determined, and showed their resolve and solidarity throughout the process. We congratulate the crew on this result and are glad to see that this successful show will be a union production going forward.” Created by Raphael Bob-Waksberg and designed by graphic artist Lisa Hanawalt, BoJack Horseman debuted its fifth season this past September 14 and has been renewed for a Season 6. The series revolves around the titular character (voiced by Will Arnett), a legendary but fatally flawed former 90s sitcom star from the family-favorite sitcom Horsin’ Around, who has been trying to find his way through a muddle of self-loathing, whisky and failed relationships. Now, in the presence of his human sidekick Todd (Aaron Paul) and his feline agent and ex-paramour Princess Carolyn (Amy Sedaris), BoJack is primed for his comeback. The series also stars Alison Brie and Paul F. Tompkins.

The series is produced by The Tornante Company and animated by ShadowMachine; it is executive produced by Bob-Waksberg, Steven A. Cohen and Noel Bright, alongside Arnett and Paul.

The Animation Guild, IATSE Local 839 (TAG) is a labor union representing animation workers in motion pictures, television, cable and new media. The Guild negotiates and administers contracts that protect the creative and economic rights of its members; conducts events, programs and seminars on issues of interest to members; and advocates for members’ issues in the political and legislative spheres.