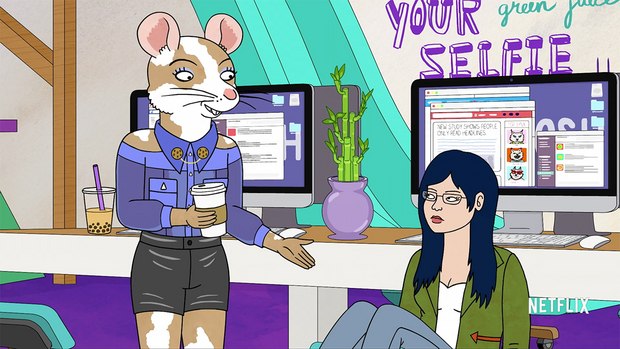 Animation has a diversity problem, exemplified by increasing criticism of the industry’s casting of white actors to play non-white characters. The issue came to the fore with the airing in November of Hari Kondabolu’s TV documentary The Problem with Apu, which examined The Simpsons’ writers portrayal of the Indian character Apu and the casting of Hank Azaria in the role.

Since then, other instances of “whitewashing” have been highlighted, including the casting on Netflix’s BoJack Horseman of Alison Brie as the voice of Diane Nguyen, a Vietnamese American woman. Other examples include Mike Henry, who voiced Cleveland Brown on Family Guy and The Cleveland Show; Justin Roiland voicing Rick Sanchez on Rick & Morty; and the cast of Avatar: The Last Airbender.

When the question was posed earlier this month via Twitter to BoJack Horseman creator Raphael Bob-Waksburg, he replied to the criticism openly, writing: “Short answer: I love my entire cast, but if I were doing it today, I would not cast the show (or any show) with all white people. I've really soured on the idea of ‘color-blind’ casting as an excuse to not pay attention.”

Bob-Waksburg has expanded on the subject in an interview with the website Uproxx, saying it’s an issue that he’s thought more about over the past few years.

“For a while I thought, maybe I shouldn’t be the one having this conversation. Maybe it’s better if other people are talking about the show — people of color, people who have lived experience, people who can actually talk about this more eloquently than I can. Maybe it’s better for me to just make the show and try to listen to what people are saying and adjust (accordingly),” he said. “But more and more I feel like this is my show and these are decisions that I’ve made and it’s my responsibility to talk about them even if it’s going to be awkward and even if it’s going to feel weird for me. … I think it’s worth talking about and I feel like my silence can be read as ‘There’s not a problem here’ and I’m not comfortable with that anymore.”

Bob-Waksburg went on to say it was a difficult topic to address in BoJack, because it’s still in production. He says the character was always meant to be Vietnamese American, and was developed to be three-dimensional and well-rounded. “She’s going to be fully American, her race is barely going to play a factor and she’s just going to be a person.”

Still, he says it was difficult to find Asian actresses that were right for the role, and cast one in the role that became unavailable after four episodes were recorded, prompting the production to recast the part. Opening it up to non-Asian actresses due to time constraints led them to Brie, who Bob-Waksburg says has done a fantastic job. “I don’t want to disparage her in any way because I think she’s brought so much of the character to life and she’s helped my understanding of the character,” he says. “And I think in many ways, she’s the perfect person for this part. But I think there’s one very specific and one very important way in which she’s not the perfect person for this part.”

Bob-Waksburg says he began crunching numbers to ensure characters of color were not just getting representation but also lines in each episode of the show. He says the show has made significant progress on that mark, but concedes there is still room for improvement.

“I really don’t want to create the appearance that my work is done, or that I’m a good guy,” he told Uproxx. “I just want to explain how I’ve noticed these problems and how I’m trying to fix them. I don’t think I can fix all of them, but I think we’re working on it.”