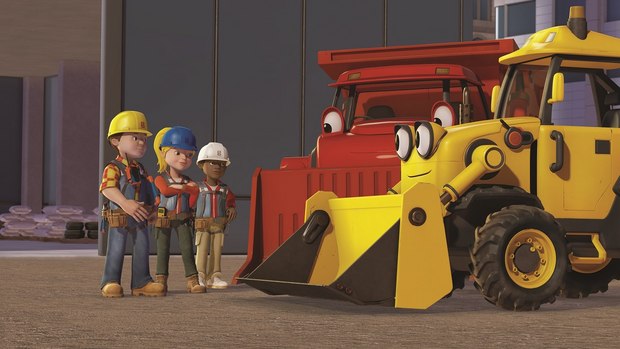 Little builders can grab their hard hats and tool belts -- Bob the Builder will premiere eight all-new half-hour episodes on PBS KIDS starting November 12. Building on the success of the 2015 revamp of the series, Bob the Builder is returning with new adventures that promote social-emotional growth and introduce preschool STEM (science, technology, engineering and math) themes. In these action-packed new stories, Bob and the team tackle their biggest and most impressive construction jobs yet.

Additionally, kids, parents, and teachers can find an array of fun new activities at pbskids.org/bobthebuilder. Families will also be able to stream clips and full episodes on the free PBS KIDS Video App, which is available on a variety of mobile devices and on platforms such as Roku, Apple TV, Amazon Fire TV, Android TV, Xbox One and Chromecast.

Bob the Builder is produced by HIT Entertainment, one of the world’s leading preschool entertainment companies and a subsidiary of Mattel, Inc., together with THIRTEEN Productions LLC in association with WNET, New York’s flagship public media provider and a pioneer in educational programming.

“Bob the Builder is built on themes that are important for children to learn at a young age, including teamwork, determination, and optimism,” said Christopher Keenan, SVP & Executive Producer at Mattel Creations. “We are looking forward to bringing all-new episodes to PBS KIDS so little ones can continue to grow and learn with Bob and the team.”

Bob the Builder relaunched in the fall of 2015 featuring CG-animation, brand new locations, and a new look for Bob. In the U.S. and U.K., the cast also features Downton Abbey’s Joanne Froggatt as the voice of Bob’s trusted friend and colleague Wendy.

Bob the Builder has been broadcast in over 175 countries and translated into 40 languages, exciting and engaging millions of preschoolers across the world. In addition to the broadcast episodes, this new look is also featured in a series of 40+ shorts running currently on YouTube here.