Memorial celebration for Bob Balser, the animation director for The Beatles’ 1968 feature, ‘Yellow Submarine,’ to be held Saturday, January 16 at the Marina City Club in Marina del Rey, CA. A memorial celebration has been planned for Bob Balser, perhaps best known as the animation director for The Beatles’ 1968 feature, Yellow Submarine, who passed away in Los Angeles on January 4th at the age of 88.

The memorial celebration will be held at 4:00PM on Saturday, January 13 at the Marina City Club located in Marina del Rey at 4333 Admiralty Way. Valet parking is available in front of the lobby, where there is an elevator to the third-floor restaurant. Bob’s widow, Cima Balser, will be in attendance at the event. 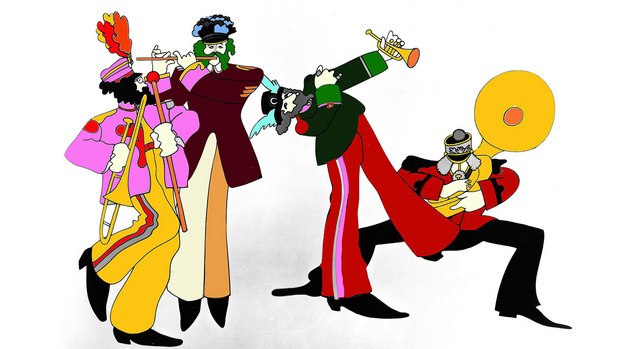 Robert (Bob) Balser was born on March 25, 1927, in Rochester, New York. His parents later moved to Los Angeles, where he attended Junior High, High School, and art classes at Chouinard. He served in the Navy, O.S.S. Office of Research and Inventions, New York 1945-46.

He attended UCLA on the GI Bill of Rights, majoring in Advertising Art. In his final year the only class which would satisfy the requirements needed for his BA, was an Animation Class, taught by Disney’s Bill Shull, and that was love at first sight. So was his meeting Cima, and they were married one week after his graduation, on June 25th,1950.

He continued to audit the Animation class and completed three short films, “Old King Cole,” “Richard Corey,” and “I Like to See It Lap the Miles,” later released by the Theater Arts Department.

Starting to freelance, he did Animation lay-out for Norman Wright Productions, various TV commercials and documentaries, and in 1956 he did the famous Saul Bass epilogue for “Around The World in 80 Days.”

Then, in 1959 he and Cima left Los Angeles with two one-way tickets on the Maasdam, New York-Le Havre, $1,800 in travelers checks, and a copy of “Europe On $5 a Day,” hoping for a six-month sabbatical.

While traveling, they wrote reviews for UCLA’s FILM QUARTERLY, with press passes for the Cannes, Moscow, and Venice Festivals. After five months when their money ran out, they accepted Laterna Film’s offer to work in Copenhagen. That was followed by a year in Finland where he set up an animation unit at Fennada Filmi studio, which produced several award winning films. During that time, they had saved enough money for more travel, now through Germany and Italy, and when that was spent, it was back to Copenhagen for more animated film work.

Next it was Estudios Moro in Madrid. Two successful years in Madrid, two in Barcelona, with more awards, before London, the Swinging Sixties, “The Yellow Submarine,” the “Jackson 5” series, and his new born son, Trevel.

Returning once again to Barcelona, Bob, along with Spanish partners, established Pegbar Productions animation studio. They worked with DePatie Freleng in Hollywood on the one-hour special, “Luvcast USA,” and over the succeeding years he produced and directed episodes of “Kid Power,” “Count of Montecristo,” for the U.S., and “Cantinflas” for Mexican television. He was animation director for the feature film, “Three Musketeers,” in 1973, and in 1975 Pegbar contributed the Spanish section of the film, “Fables of Europe” and the central 30-minute section of the Emmy winning TV feature film, “The Lion, The Witch, and The Wardrobe.”

During this period, he directed more than 175 commercials and documentaries for most European countries and as far away as Iran.

Bob and Cima traveled constantly, were regulars at ASIFA’s animation festivals, with Bob serving on the boards, many juries, and when the EC Media’s CARTOON was established, Bob was President of that board for 14 years.

They also were one of five couples who founded the Benjamin Franklin International School in Barcelona in1986, which today has over 500 students.

Bob closed Pegbar Productions in 1993, and directed the “Triplet” series for Cromosoma Productions before leaving Spain in 1996, after which he spent several months as an Animation consultant in Cairo with the International Executive Service Corp, followed by two years in Ankara, directing TV series for Germany and the States.

Finally retiring to Marina Del Rey in 1999, he spent his time lecturing, consulting, and as an active member of BAFTA and the Academy of Motion Picture Arts and Sciences Short films and Animation Feature Branch

He leaves behind Cima, his wife of 65 adventurous years, son Trevel, daughter-in-law, Patricia, their children, Jordan, Viky, Jose, Angelina, and Maya, sister Renee, and brother-in-law David, nephew, Todd, dear cousins, and many, many close friends and co-workers around the world, all of whom have known his honesty, genuine kindness, generosity, creative talent, bottomless curiosity, great courage, unstoppable humor, and deep love of life.