Season 1 of the popular animated preschool series now playing on Disney Junior, DisneyNOW, and Disney+; the series follows the Cassidy family who are charged with wrangling a lively herd of dinosaurs who are also their best friends. 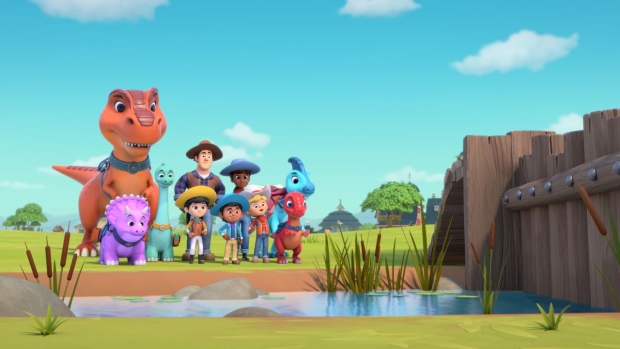 Boat Rocker has greenlit the popular CG animated preschool series Dino Ranch, coming to Disney Junior, DisneyNOW and Disney+ in the U.S. & Latin America in 2022. Season 1 is now available on Disney+ with the first 13 episodes already streaming and additional episodes to follow.

Dino Ranch is the ultimate playground – a working farm under the big skies of ranch country - and home to the tight-knit Cassidy family, Ma (Jane), Pa (Bo), and their three adopted kids, Jon, Min and Miguel.  An imaginative world full of adventure, fun, and problem-solving, Dino Ranch celebrates teamwork and friendship as the Cassidy family rounds up, rides, and cares for a lively herd of racing, roaring dinosaurs!

“Dino Ranch has received an incredible response from kids and parents around the world and we couldn’t be happier to have the opportunity to produce a second season,” commented Boat Rocker Media president and general manager Michel Pratte. “The show is a shining example of franchise IP for Boat Rocker, and we are looking forward to continuing to build brand affinity and engagement love for ‘Dino Ranch’ with our partners.”

“We’re very excited to continue our strong partnership with Disney for Dino Ranch,” added Boat Rocker Studios, Kids & Family and Rights president, Jon Rutherford. “Disney’s incredible support, along with the show’s ability to resonate with audiences through its unique blend of dinosaurs, family and engaging storytelling has helped us achieve immediate success. With Season two, we plan on deepening engagement with our fans by unveiling new characters and locations, and many new thrilling adventures with the Cassidy family.”

Fans can spend their final weeks of summer with the hit show. Following its debut on Disney Junior and DisneyNOW with two all-new episodes at the beginning of the month – or watch the first 13 episodes now streaming on Disney+, with more episodes to follow: Boat Rocker has developed a broad licensing program for Dino Ranch, partnering with Jazwares on a full-line of Dino Ranch-themed toys which will be available fall 2021. The company is also working with master publishing partner, Scholastic to design and produce a wide range of Dino Ranch readers, sticker story books, novelty, activity books, and audio books with products due to launch in the fall. Further licensees have been secured in the U.S. for apparel, bedding & bath, watches, Halloween costumes, and costume characters for live events.